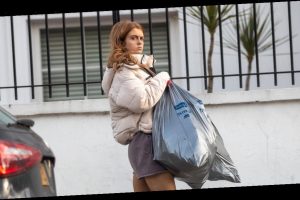 Maisie Smith has been photographed putting on a casual display days after the Strictly Come Dancing final.

The 19 year old made it to the finals of the popular BBC show with professional dance partner Gorka Marquez, but missed out on winning to Oti Mabuse and comedian Bill Bailey.

Now the EastEnders star has been spotted easing her way back into her normal life by clearing her flat and taking the rubbish out.

Actress Maisie was first seen walking down the street, appearing to speak to someone on the phone, as she donned a baggy white Nike T-shirt and taupe shorts that highlighted her toned legs.

The red-haired beauty, who styled her mane down into loose curls, donned some cosy looking Nike slippers to match the rest of her outfit.

Maisie, who cried when she saw her sister Shona McGarty make a surprise appearance on Strictly, opted to wear no make up as she stepped out of her Essex home.

The star later obviously had a bit of clear-out of her flat as she came out with two massive rubbish bags to take to the bins.

While Maisie unfortunately didn't bag the winning spot on the show, top celebrity talent manager Jonathan Shalit recently predicted she "could be the next Michelle Keegan" if she plays her cards right.

Speaking to new magazine, he said: "Maisie’s a professional, she’s fantastic, she’s very talented, she’s gorgeous. She’ll go on to be the next Michelle Keegan.

“At the end of the day, she’s an incredibly talented actress and when you’ve got talent behind you, everything is possible.”

Maisie has been the victim of trolling during her stint on the BBC dance show, but Jonathan believes she is resilient. “Success brings trolls,” he declared. “Maisie can bounce back from trolling. Getting as far as she has is a hell of an achievement and shows she’s very popular.”

Jonathan also predicts that winner Bill, 55, "will sell out at the Palladium".

“Until now, he’s been performing in theatres, but I can see him going as far as Micky Flanagan and Michael McIntyre," he said.

“He’s everyone’s favourite father and favourite grandfather. He will now earn millions selling out arenas and hosting television comedy shows. I could see him having his own show at the Palladium.”

END_OF_DOCUMENT_TOKEN_TO_BE_REPLACED

END_OF_DOCUMENT_TOKEN_TO_BE_REPLACED
We and our partners use cookies on this site to improve our service, perform analytics, personalize advertising, measure advertising performance, and remember website preferences.Ok