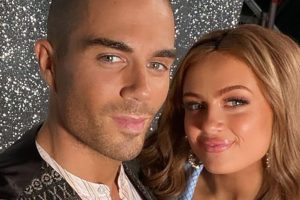 The Strictly Come Dancing star, who will be testing her mettle in the upcoming Celebrity SAS: Who Dares Win series which returns on Sunday, took to social media to share a stunning photo of herself as she told her followers: “never look back.”

The 21 year old stunner recently confirmed her romance with Max late last month, after the couple were spotted enjoying a loved up holiday together in sun soaked Greece.

They are also rumoured to have moved in together in recent weeks, with the pair even spotted purchasing a variety of soft furnishings and homeware items in central London.

Shocked and hurt by the news, Stacey branded Max a “lying dog” after discovering the relationship, with Maisie now appearing to subtly hit back at her boyfriend’s scorned ex in her latest post.

Sharing an image online that featured her sporting a tight fitting one piece jumpsuit complete with jewelled embellishments all over, Maisie ominously told fans to “never look back.”

Glancing over her shoulder to strike a glamorous pose, she wrote: "Never look back, unless you're wearing a pretty backless jumpsuit.”

Fans were quick to flood to the comments to praise Maisie for her photo, with many loving her throwback to the golden age of Hollywood with her glamorous makeup look and cascading auburn locks.

Beau Max was one of the first in line to praise her as he commented with a single red heart emoji, alongside countless fans who called her “beautiful” and “stunning.”

The Wanted singer also appeared to confirm that he had indeed moved in with Maisie, and was even planning to surprise the actress with a huge new tattoo in her honour.

The news of the public romance came just weeks after Max, 33, revealed he had split from his girlfriend Stacey, 43, for a second time in order to be with his new flame.

The young couple first sparked dating rumours earlier this year after reports emerged of them “snogging on a plane” during a recent holiday trip.

More speculation followed as the duo were later seen stepping out holding hands together in London as they continued to spend more and more time together, including rumours that the two are already living together after Maisie was spotted leaving Max’s London apartment.

Last month Max appeared to address the ongoing romance rumours for the first time, as he debuted a new tattoo which completely covered up his previous tribute to ex-Stacey.

Up until recently, the singer had sported Stacey’s name on his wrist, but this was soon covered up last month by a large lion and rose design which completely erased the tribute to his former lover.