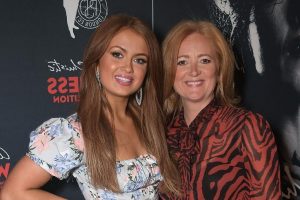 Many TV viewers were quick to recognise one of the models on This Morning on Thursday, as Maisie Smith's mum Julia appeared during Lisa Snowdon's fashion segment.

Lisa, 50, was showing viewers the best way to style different types of trousers on 25 August's show, with guest hosts Ruth Langsford, 62, and Rylan Clark, 33, joining her by the side of the catwalk.

Julia was one of the models featured in the segment, and the mum-of-two wore a French-inspired look consisting of a striped blouse and tapered trousers, paired with a crossbody bag.

As she walked down the runway, Lisa turned to Ruth and said: "This is a you look Ruth. A perfect cropped tapered trouser with the split, absolutely lovely."

Lisa went on to provide details about the trousers for viewers, and explained that they had shapewear built into them to help lift, shape and sculpt you.

"You said you'd never wear a pant like this," she said to mum-of-two Julia, who then admitted: "I don't like my legs. I feel like they're doing the right thing," as she gestured towards her legs.

Viewers were quick to recognise Julia, who is mum to former EastEnders actress and Strictly Come Dancing star Maisie, 21.

She is also heavily involved in the world showbiz herself, as she works as a talent manager. Julia, who is also mum to daughter Scarlett, manages her famous daughter as well as many other young stars.

She was even recently spotted filming scenes for EastEnders herself, as she appeared as an extra in episodes filmed in Southend earlier this year, which focused on Jean Slater's (Gillian Wright) struggle with bipolar disorder.

Julia shares a very close bond with Maisie, and she can regularly be found appearing in her daughter's fun TikTok videos and supporting her on the Strictly Come Dancing live tour.

Her This Morning appearance comes after Maisie was recently spotted packing on the PDA with her rumoured beau Max George, 33, in central London.

Rumours that the pair are dating have continued to circulate over recent weeks, after reports emerged of them “snogging on a plane” during a recent holiday trip.

More speculation followed as the duo were later seen stepping out holding hands together in London as they continued to spend more and more time together, including rumours that the two are already living together after Maisie was spotted leaving Max’s London apartment last week.

The couple's latest PDA has left no doubt that the pair have grown closer than ever, as they enjoyed the romantic exchange while shopping in Kensington High Street this week.