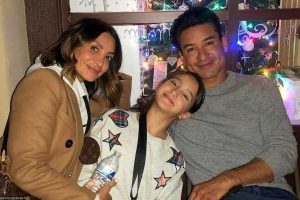 Appearing on ‘Overserved With Lisa Vanderpump’, the former ‘Saved By the Bell’ star spills on the embarrassing and ‘traumatic’ moment he shared with Courtney Mazza because of their child.

AceShowbiz -Nothing is more humiliating and frightful for parents than being caught having sex by their children. Unfortunately, Mario Lopez and his Broadway dancer/actress wife Courtney Mazza had to go through such experience.

The 47-year-old radio host/actor spilled on the embarrassing story when appearing in a Thursday, April 29 episode of E!’s “Overserved With Lisa Vanderpump“. Asked about his sex life by host Lisa Vanderpump, he admitted that his 10-year-old daughter Gia once caught him and his wife having sex.

Lisa first brought up the steamy topic by asking, “How do you have sex when you have three children anyways?”, In response, Mario stated, “Oh my gosh, it’s all about the quickie now.” He went on to recall a recent incident he described as “traumatic.”

“This was so traumatic, our daughter walked in on us the other day…,” Mario began sharing. His wife Courtney then offered a background story, noting that the two of them decided to have sex in their guest bedroom for “a little getaway.” They didn’t notice that Gia was looking for them.

When Courtney said that she thought everything would be fine because it only took “however many minutes,” Mario lightly complained, “Wait, that didn’t come out right!” The statement prompted host Lisa to jokingly say, “I would be shagging you every day if it was only a couple of minutes.”

Courtney went on to note that the two of them skipped locking the guest bedroom’s door thinking no one would bother them since there were also hired movers in their home. The decision proved to be the wrong one. “[Gia] came to look for us and opened the door…,” she recalled. “So this is the worst thing, right? I was like lightning with the covers.”

On what the two did in the wake of the accident, Mario recounted, “I said, ‘I got to go talk to her,’ but we couldn’t find her for like an hour.” When they eventually did find Gia, the two decided to have an honest conversation with their pre-teen.