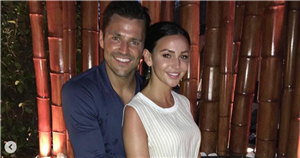 Michelle Keegan and her husband Mark Wright celebrated their sixth wedding anniversary with a touching tribute as they returned to their wedding venue.

The power couple, who are currently reportedly living apart again as they continue with home renovations, toasted two glasses of champagne together as they sat outside Hengrave Hall, where they walked down the aisle years ago.

They made the most of the sunny weather as they perused around the stately manor's grounds and soaked up the sun with their two dogs, chihuahua Pip and dachshund Phoebe.

The actress, 33, shared the special occasion with her 4.9 million followers on Instagram as she paid a loving tribute to her husband Mark, 34.

The Our Girl star, who recently gave a drama masterclass at her brother’s school, also shared a throwback picture from their big day as the stunning couple made things official surrounded by all their friends and family.

They tied the knot in 2015 in Bury St Edmunds, Suffock after the pair met on holiday in Dubai and went on their first date just a few days after they landed in the UK.

Mark also shared a touching tribute to his beautiful wife on Instagram along with a collection of photographs of the lovebirds over the years.

The former The Only Way Is Essex star wrote: “6 years just like that!! Feels brand new every day. Happy anniversary Treac. I love you,” with a blue heart emoji.

The comments were soon filled with congratulatory messages from their celebrity friends.

Olly Murs wrote: “F**k me do either of you take a bad photo! Good looking f**kers!!” The couple are currently renovating their £1.3 million house in Essex.

The former Coronation Street star recently said she didn’t see the previous long-distance in their marriage as a bad thing.

Speaking on Irish comedian Mairead Doyle's podcast Craic On, Michelle explained: "People, especially the media at the time, were turning it into a negative that I was working away and Mark was working in LA.

"Mark was living in LA full time for a year and a half and I was going back and forward. I was out there for a couple of months at a time.

She added: "It was actually really nice. I feel like we’ve done that, we’ve ticked it off our list to live out there, we’ve done it, we’ve lived the LA life and it was brilliant.

"But we both missed home. It was more Mark’s decision really because obviously he was the one working out there."