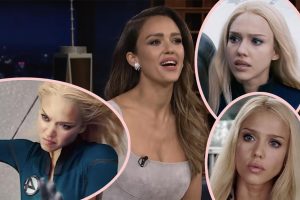 Jessica Alba is one of the most successful women in Hollywood, right? Only… even at the height of her movie stardom, she was having trouble finding parts. The Latina actress has been fairly open about having trouble getting the best leading roles — often because she was thought of as too “exotic.” Sigh.

Her film career over the past decade hasn’t exactly shown a big difference there. She’s worked steadily but in smaller and smaller movies. No, the Dark Angel star’s biggest success is what she made for herself, creating a half-billion dollar empire with The Honest Company. And we’re so happy she did — for her fam of course, but also selfishly because it means she can speak her mind without worrying about the repercussions. And we LOVE to see it.

The latest example? In a no effs given interview with Glamour UK released on Thursday, Jessica made it clear what progress has been made in the push for diversity is far from being driven by “wokeness” — it’s about the bottom line! She explained:

“It’s a business initiative for people now that they realize how much money they can make. It’s something they care about, which is fine. How they get there really doesn’t matter. You’re like, ‘Great. Now you realize there’s a whole group of folks that you just frankly left out of the conversation because you just didn’t even see them. They were there the whole time.’ And I guess it’s the people in charge.”

Driven by business acumen or genuine good intentions, the important thing is that industry has started putting more people of color on the screen. The Into The Blue star reasoned:

“However they get there, it really genuinely doesn’t matter. I just think more for the younger people who are coming up, who are going to be our future leaders, it’s important for them to see the world on screen, or in stories, in the dreams that we create as entertainers; it reflects the world that they’re in.”

And Jessica is savvy enough to know how to make headlines with her comment — going the ol’ Scorsese route of taking on Marvel! She added:

“Even if you look at the Marvel movies — that’s the biggest driver of fantasy and what’s happening right now in entertainment, because it’s sort of the family thing — it’s still quite Caucasian.”

She isn’t wrong. It took a decade for Marvel Studios to start focusing on diversity — and, just as Jessica pointed out, to find a gold mine there with the phenomenal hit Black Panther, which substantially outperformed box office expectations. Now they’re adding characters like Shang-Chi and the Eternals, but those are still more the exception than the rule. And don’t get us started on how few female-led movies there still are…

Referring back to her own foray into Marvel movies, back in the 2005 iteration of the Fantastic Four, she referred to her own outlier status as a woman of Mexican descent:

“I would say I was one of the few back in the day… And it was before Marvel was sold to Disney… but it’s still quite… more of the same.”

Well, thankfully not exactly the same.

It’s not talked about a lot, but what they did to Jessica on those FF movies, particularly the sequel, Rise of the Silver Surfer, is pretty darn egregious. At a time when they were dying Kirsten Dunst‘s hair to make her look like Mary Jane Watson, a whole studio apparently thought it was equally fine to transform a Latina into the Doris Day of Marvel Comics. Not only did they dye Jessica’s hair blonde, they also lightened her skin and gave her blue contact lenses. The entire effect is a Wayansian White Chicks look that would have gotten that movie #cancelled in the Year of our Lord 2022. 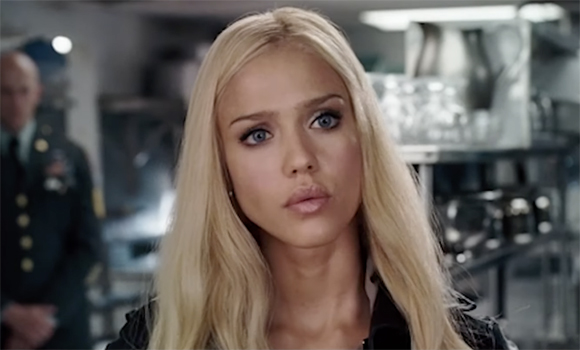 Not only was she “one of the few” but they made her look as white as white can be? Progress may be slow on the diversity front, but at least we know better than that.

Eesh, we hope. That said, the cast of the next Fantastic Four is expected to be unveiled at San Diego Comic-Con this weekend. Guess we’ll see?

You can read all of Jessica’s interview HERE!