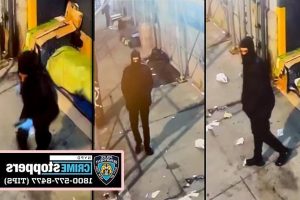 Police in New York City are on the hunt for a killer — and they’re looking for help.

Late Sunday the NYPD released surveillance photos (see above) of a masked, hooded man who can be seen in footage sneaking up on a homeless man in a sleeping bag and shooting him twice, in the head and neck. According to police, this is at least the sixth such attack on unhoused victims in just two weeks — making this officially the act of a serial killer.

The first three attacks happened earlier this month in Washington, DC, but after a few days, police believe, the same suspect moved on to Manhattan where he continued the same types of attacks, shooting defenseless, sleeping homeless people in the middle of the night.

Thus far three of the shootings have been fatal. But it’s clear this killer is working fast. On March 3, a man was shot and wounded at around 4 a.m. in DC. On March 8, a second was wounded — that was at about 1:30 a.m. The very next day, however, another man was found dead inside a burning tent. He was found to have multiple stab and gunshot wounds. It was after that fatality that the killer traveled to New York.

These photos may be of the suspect while he was in Washington, courtesy of the DC Police Department:

At about 4:30 a.m. on Saturday a 38-year-old man sleeping near the entrance to the Holland Tunnel was shot in the arm and woke up screaming — apparently scaring the attacker away. But it didn’t scare him for long — at 6 a.m. he shot a man sleeping on Lafayette Street, killing him. The body was found on Saturday afternoon.

The latest victim — killed just a day and half later — was a 43-year-old man found in Tribeca who, tragically, has not yet been identified. The murder took place at around 7 p.m. on Sunday evening at the corner of Greenwich and Mary Street in Tribeca — police know the when, where, and how all too well because there’s video footage.

The police have very little to go on. On the release of the surveillance video, Adams said:

“The video is chilling to see a cold-blooded act of murder. We need to find this person, and we need New Yorkers to help us… We are not going to rest until we find the individual responsible for this terrible act of taking the life of an innocent person merely as they slept on the streets. We are calling on the public to help us solve this case.”

Police are offering a $10,000 reward to anyone who provides information that leads an arrest.