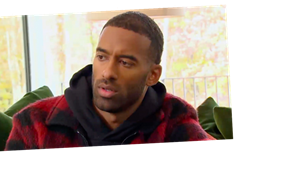 Matt James says he doesn’t “condone or stand for” body shaming, after the release of a video in which a friend made fun of one of his Bachelor suitors, Victoria Larson.

“That’s not my character and that’s not what I’m about. It’s a shame that that’s even associated with what was going on,” Matt tells the ladies of The Real on Thursday. “I apologize on his behalf. I don’t know if you’ll get it from him, but that’s not something I support or stand for.”

The comments were made as Matt and his pals recently played a round of golf, in a video posted by @bachelornation.scoop earlier this week. In an attempt to distract Matt while he’s putting, a friend named Jerry quips, “Now how was Victoria’s body? ‘Cause when I look at her, it doesn’t look very nice …and you’ve been making out with this woman.”

The group breaks into laughter at the comment, though Matt’s face isn’t seen onscreen. His response is simply to ask for someone to “pull the pin” so he can attempt his putt.

“It’s just a constant reminder that you need to be smart about the people you surround yourself with,” Matt says on Thursday.  “Those moments when you’re in sports and people are trying to say things to you to throw things off your game, it’s sad that someone would think saying something like that about a woman that I was dating would deter me from what I was trying to do.”

Television Secrets From Inside the Famous ‘Bachelor’ Mansion (Exclusive)

Television Secrets From Inside the Famous ‘Bachelor’ Mansion (Exclusive)

“I said something to him off-camera about it. Something along the lines of, ‘Victoria wouldn’t have given him a second look,'” he adds. “It’s always the pot calling the kettle black. Who is he to comment on someone’s body? It’s such a low blow for any man to try and take a dig at something like that.”

For her part, Victoria didn’t seem too bothered, commenting on the Instagram post, “Cute…. I love my body,” with a smiley face. She later shared pics of herself in a black bikini to her own page, with the caption, “Y’all r too much 😹💃🏽 body by @naturalpilates & @carriespilatesplus.”

On Tuesday, Victoria sat down with Good Morning America to talk about her Bachelor experience and address claims of bullying made by some fans after she took aim — and tried to take down — several fellow contestants over the last four weeks.

Her roommate, Marylynn, was sent home after Victoria claimed she was “toxic” to Matt. Then, she set her sights on Sarah, who left on last week’s episode after the women ganged up on her for interrupting a group date. On Monday, Victoria and Anna led the charge in making disparaging comments and spreading damaging rumors about a new contestant, Brittany, claiming that she was an escort.

“I anticipated being well received, so to get the bullying messages and the hate mail and the death threats, I wasn’t really prepared for that at all. A hundred percent, it was shocking,” Victoria said on GMA. “I don’t think my kindness really got to show through and I really do have a good heart.”

The Bachelor airs Mondays at 8 p.m. PT/ET on ABC. See more on this season in the video below.