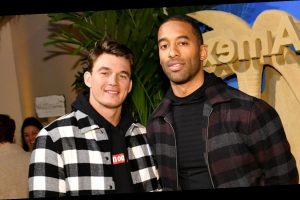 Matt James is wishing Tyler Cameron a happy birthday with a heartfelt message. The Bachelor took to Instagram on Sunday to wish his best friend a happy 28th birthday, alongside a note about Tyler’s late mom, Andrea.

Tyler’s mom Andrea died of a brain aneurysm less than a year ago. In an interview with ET last March, Matt revealed that Andrea had nominated him for The Bachelorette. (Due to the coronavirus pandemic-caused production delay, he never appeared on Clare Crawley’s season, and was instead cast as the Bachelor.)

“She would be happy to know that I followed through with it,” Matt said. “She had nominated me and I think she saw everything that it did for Tyler and the way that he had changed as a man, and me being his roommate and being one of her sons, I think that she wanted something like that for myself.”

Tyler opened up about his mother’s death in an interview with ET just before Mother’s Day last year. He told ET that staying at her home in Jupiter, Florida, and spending time with his brothers in quarantine has been a true “silver lining.”

“It’s the silver lining within all of this, is that although it was tragic what happened to my mother, I couldn’t imagine being back in New York,” he said. “I’ve seen the challenges and the tough times that they’ve faced, because I got to be here.”

“So, the silver lining is that I’m grateful I’ve been able to be here and be there for them… because I couldn’t imagine them being alone right now and myself being alone either,” he shared.

Tyler added he always wanted to surprise his mom and remodel her house. “I still owe it to my little brothers, just to remodel it for them now and make sure they have a place they can always call home,” he said. “So, that’s my goal right now.”

See more in the video below.