Matthew McConaughey Breaks Down at The White House, Pleads for Gun Control 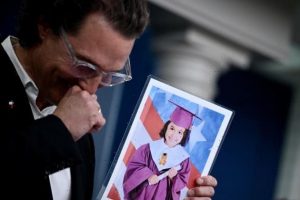 Matthew McConaughey met with President Joe Biden and other lawmakers at the White House on Tuesday afternoon, prior to taking to the podium in the administration’s briefing room and delivering an emotional speech on gun control.

The actor is a native of Uvalde, Texas.

His hometown was the site of a mass shooting late last month after an 18-year old gunman opened fire inside of an elementary school classroom, murdering 19 studdents and two teachers.

At one point, McConaughey said that he and his wife, Camila Alves, had spent most of the past week with the families of victims who were killed in the massacre.

“You know what every one of these parents wanted, what they asked us for?” the actor said.

“What every parent separately expressed in their own way to Camila and me?

Echoing the plea of millions of Americans, McConaughey said there was a “window of opportunity” to enact meaningful gun legislation reform.

He called for universal background checks… raising the minimum age for purchasing an AR-15 to 21… and a waiting period for purchasing AR-15s, along with the implementation of red flag laws.

The speech lasted for about 20 minutes.

“These are reasonable, practical, tactical regulations to our nation, states, communities, schools and homes,” McConaughey said.

“Responsible gun owners are fed up with the Second Amendment being abused and hijacked by some deranged individuals.

“These regulations are not a step back — they’re a step forward for a civil society and, and the Second Amendment.”

McConaughey held up pictures of some of the very young victims, and also detailed the hopes and dreams many had in life… before that life was taken from them.

McConaughey spoke in great detail about the children and what dreams they held before they were killed — one wanted to be a marine biologist, one had been preparing to read a Bible verse at church the next week, another wanted to go to art school in Paris.

“Due to the exceptionally large exit wounds of an AR-15 rifle, most of the bodies so mutilated that only DNA test or green converse could identify them.

“Many children were left not only dead but hollow. So, yes, counselors are going to be needed in Uvalde for a long time.”

Amid renewed calls for Congress to do something about the rash of mass shootings across the country, McConaughey continued:

“We got to get some real courage and honor our immortal obligations instead of our party affiliations.”

In terms of reaction from Hollywood, Kim Kardashian previously issued her own lengthy statement on gun control in the wake of this tragedy; while Meghan Markle stopped by Uvalde to pay her respects.