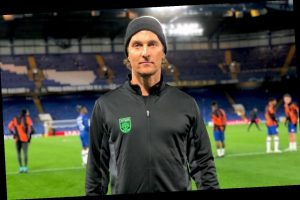 The ‘Dallas Buyers Club’ actor is open to entering politics and possibly running for governor in his home state of Texas when ‘politics redefines its purpose.’

AceShowbiz –Matthew Mcconaughey is considering a potential career in politics, admitting he “could be” interested in running for governor in his home state of Texas.

The “Fool’s Gold” star recently appeared on “The Hugh Hewitt” radio show, with the host asking if Matthew would ever think about swapping a career on screen for one in office.

“I don’t know. I mean, that wouldn’t be up to me,” Matthew responded. “It would be up to the people more than it would me. I would say this. Look, politics seems to be a broken business to me right now. And when politics redefines its purpose, I could be a hell of a lot more interested.”

Matthew added that he wants his fellow Americans to “rebind our social contracts with each other” as he feels the Democrats and Republicans have lost “trust” in one another since the U.S. presidential election.

“So I’m all for the individual, and I think … to make collective change that the individual needs to look in the mirror and say how can I be a little bit better today? How can I, how can this selfish decision I want to make for myself correlate and also be the decision that’s best for the most amount of people?” he continued.

If Matthew did decide to try and make it in politics, he wouldn’t be the first actor to forge a new career as a politician. Arnold Schwarzenegger was formerly the Governor of California while “Sex and the City” actress Cynthia Nixon unsuccessfully ran for the governor of New York position.