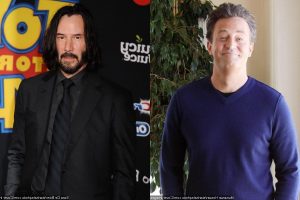 The former ‘The Odd Couple’ star backtracks on his scathing remark in his upcoming memoir about the ‘Speed’ actor, claiming that he’s ‘actually a big fan of Keanu.’

AceShowbiz –Matthew Perry regrets taking a dig at Keanu Reeves. Apparently realizing that he had chosen the wrong person as his target, the “Friends” alum has apologized for wishing death on the “John Wick” star.

Following the backlash over his scathing remark on Keanu, Matthew has issued a statement to Deadline. “I’m actually a big fan of Keanu,” so he claimed. “I just chose a random name, my mistake. I apologize. I should have used my own name instead.”

Matthew revealed his bizarre apparent hatred of Keanu in his upcoming tell-all memoir “Friends, Lovers and the Big Terrible Thing”. Lamenting that River Phoenix and Heath Ledger died at such young ages, while Keanu is still alive, he pens, “Why is it that the original thinkers like River Phoenix and Heath Ledger die, but Keanu Reeves still walks among us?”

While Keanu has not responded to Matthew’s remark, many quickly came to the “Constantine” actor’s defense. “This is not a good look for Perry. What a d**k,” a social media user wrote. Another Keanu fan declared, “Ugh not reading this crap. Love Keanu.”

A third user tweeted, “I’ve never liked Matthew Perry but I never quite knew why. Now I do. I’m so glad that Keanu Reeves is still here with us. Perry never had the it factor to be a big star like Keanu does. He just got lucky that he landed a major hit TV show.” A fourth person sent a warning to the “17 Again” star, “Matt Perry don’t f**k with Keanu. You’ve been warned.”

Someone else thought that Matthew was possibly joking, but he picked the wrong person to cite. “I feel like this is his sense of humor but the joke falls flat because Keanu is a King,” the user noted. Another echoed the sentiment about Keanu as writing, “He might be the only person in the world that dislikes Keanu reeves. Everyone talks about what a great guy he is.”