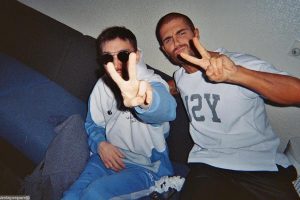 The Wanted star says he finds ‘a bit of comfort’ in sending a nice message from fans to his late bandmate, two months after Tom died of brain tumor at the age of 33.

AceShowbiz –Max George still texts late Tom Parker two months after his death. The Wanted star, whose bandmate died in March at the age of 33 after spending almost two years battling a brain tumor, has admitted the tragedy left a void in his life so he continues to send messages to his pal’s phone.

“I’m still trying to process it (Tom’s death). I still text him actually,” the 33-year-old singer confessed when peaking on “This Morning”. He added, “If I get pictures or stuff that fans have made with him in it or they send a nice message to do with Tom, I’ll WhatsApp it to him. I just find a bit of comfort in that. The worst bit is when I’m not doing it and I do it accidentally. Sometimes I go to do it and I’m like, ‘Oh no.’ “

“There were days where the days were quite long, especially when he was going through the chemo phase because I know that really knocked him, but even still, he got through it (writing the book),” the singer went on recalling. “It was probably therapeutic for him on those days where he could just sit back and talk … “

Tom’s wife Kelsey has been left to raise their two young children alone since her husband’s death, and Max revealed he checks in with her regularly to make sure she’s ok. He went on, “Kelsey’s been awesome.”

“She’s always been really strong, like Tom. They were literally two peas in a pod,” he added. “She’s raising awareness for glioblastoma and cancer in general, she’s been great. We talk quite often, just check in, make sure she’s alright.”