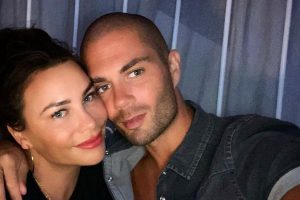 Max George's girlfriend Stacey Giggs was reportedly rushed to hospital at 3am on Thursday night.

According to reports, it was "scary stuff" but Stacey, 42, will be "OK" after she had "no choice" but to seek medical help in the middle of the night.

A source told The Sun: "Stacey was in a lot of pain and had no choice but to go to hospital in the middle of the night.

"It was scary stuff but she will be OK.

"Max was visiting his elderly grandma the following morning but made sure to keep up to date with developments with Stacey’s condition."

Just last year, The Wanted star, 33, opened up on plans to become a father someday as he gushed over his romance with Stacey.

Max sweetly said he "never felt so strongly about anyone" than he does about his girlfriend Stacey, who already has children Zachary, 15, and Liberty, 18, with ex Ryan, 47.

He said at the time: “I’d like to think this is it for me now, she’s the one. I’ve never felt so strongly about anyone.

“She is everything to me, more than what I could have ever asked for. I’m not on the move constantly now with the band, I’m extremely settled at home.

“It has calmed me down. I’m not out with the lads all the time clubbing — I’ve not done that since I met Stacey. I take my work a lot more seriously."

He told The Sun On Sunday: “Fatherhood is obviously something I would love. But I never expected I could have ­family like I do, even with Stacey’s kids.

“They are my family. I could never have dreamed of feeling so close to a woman and kids before. If we have some [kids], amazing. But I’m so happy.

“I couldn’t have asked for more. If that does happen, lovely, I’m completely content with everything.”

For all your updates on Max George, Stacey Giggs and other celebrities, sign up to our daily OK! newsletter.