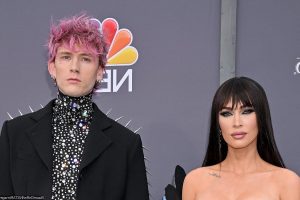 Machine Gun Kelly sparked wedding and pregnancy rumors during his performance of ‘Twin Flame’ at the 2022 Billboard Music Awards, which took place on Sunday, May 15 in Las Vegas.

AceShowbiz –Megan Fox and Machine Gun Kelly may really be an expecting couple. The pair, who sparked wedding and pregnancy rumors at the 2022 Billboard Music Awards on Sunday, May 15, appeared to further fuel the speculations when they attended Sean “P. Diddy” Combs’ afterparty at Las Vegas hotspot Tao.

For the bash, the couple arrived to the club in a hot pink stretch limo. According to Page Six, the “Transformers” actress “immediately hit the dance floor.” However, a source noted to the news outlet that the 36-year-old beauty didn’t drink booze despite Diddy’s Deleon tequila and Ciroc vodka being served freely for his VIP invite-only guests.

“She didn’t drink alcohol all night,” the informant claimed. While nothing has been confirmed, people seemed to be convinced that she skipped booze because she’s pregnant.

Rumors that Megan and MGK might be married and expecting their first child together first sparked after the singer took the stage at the BBMAs, which was held at the MGM Arena. At the award-giving event, he performed his song “Twin Flame” which he claimed was dedicated for his “wife.” Not stopping there, the “Midnight in the Switchgrass” actor told the audience, “This is for our unborn child” as a sound of a heartbeat played.

Prior to the Billboard Music Awards, MGK and Megan talked about the track in an interview with Entertainment Tonight’s Cassie DiLaura on the red carpet. Gushing over “Twin Flame” and the special meaning behind the song, the rapper shared, “I wrote this song two years ago exactly today. I played it for her, it’s all a trip, it’s like it’s all meant to be.”

“Yeah there’s like super special secret meaning to the song as well,” Fox teased. “So I’m sure I will be [emotional], but I can’t cry and f**k up this eyeliner.”

Neither Megan nor MGK has directly responded to the rumors.