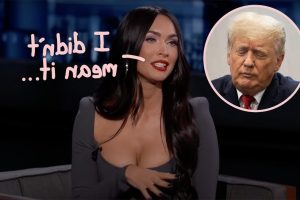 The 35-year-old actress saw Trump this past weekend while in Las Vegas to attend the UFC 264 fight event. In fact, she was seated in the same row as him — and Justin Bieber. Quite the celebrity lineup, or something…

Anyway, after the event, the Midnight in the Switchgrass star made a late-night TV appearance on Jimmy Kimmel Live! and it was there that she said what she’s apparently now very much regretting. Explaining just how good her seats were to guest host Arsenio Hall during their sit-down interview, Fox mentioned the former Commander-in-Chief as proof that she was seated right in the front of the action.

“I was in a row with Bieber, and Trump was also in my row. He had, like, thirty secret service with him. He was a legend. That arena was very supportive of Trump when he came in.”

And she continued from there, adding:

“I was like, ‘I don’t know how I feel about it, because if someone is a target, then I’m like, I could be harmed because I’m adjacent to where he is.’ So I was worried about my own safety, that’s all I was caring about. But yeah, I’ve never seen anything like that before. It was crazy.”

No kidding! But a legend?!

You can see the full video interview with Hall — the same interview in which Fox discusses doing ayahuasca in Costa Rica with BF Machine Gun Kelly (below), with the Trump reference beginning at about 4:00:

Now, Fox is walking back her “legend” comment and trying to make it clear she did not mean Trump is a legend — but, rather, he was a legend in that arena. In a set of Instagram Stories posts published on Wednesday evening, the actress wrote:

“Uhmmm … I do not align myself with any political party or individual politicians. I never said Donald Trump is a legend. I said he was a legend … in that arena (key part of the sentence). The arena was filled with UFC fight fans. Many of them clearly Republican based off the insane crowd reaction he received walking into the T-Mobile venue. That was an observable fact. Not my opinion.”

Sarcastically slamming the hate she was receiving for sharing her opinions at all, Fox then followed it up with this overly-cynical conclusion:

“Really loving this uneducated, mid-evil , pitchfork carrying, burn a witch at the stake mentality though. The world needs more of that.”

And if that wasn’t enough, she followed all that up with a SpongeBob SquarePants meme showing the cartoon’s main character tossing flower petals at an unimpressed Squidward with the caption:

“When someone can’t stand me and I send them love and light anyway.”

That’s one way to deal with your frustration, we suppose!

Here are both of her IG Stories posts (below): 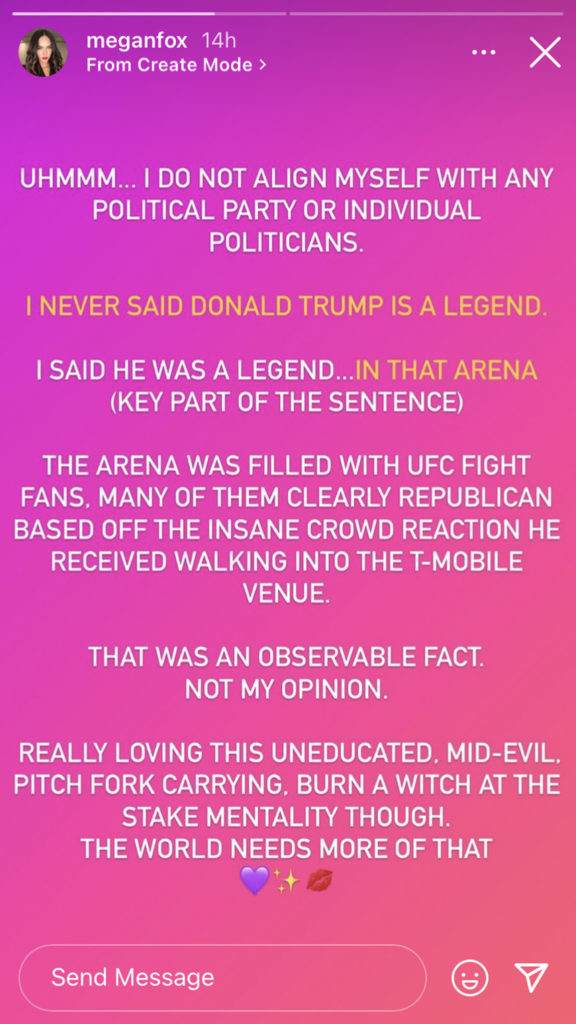 What do U make of Megan’s “legend” claim and quick walk-back, Perezcious readers?? Think she’s gone full MAGA? Or is she just relaying what that UFC crowd thought of the Donald, and he was a legend for them?! 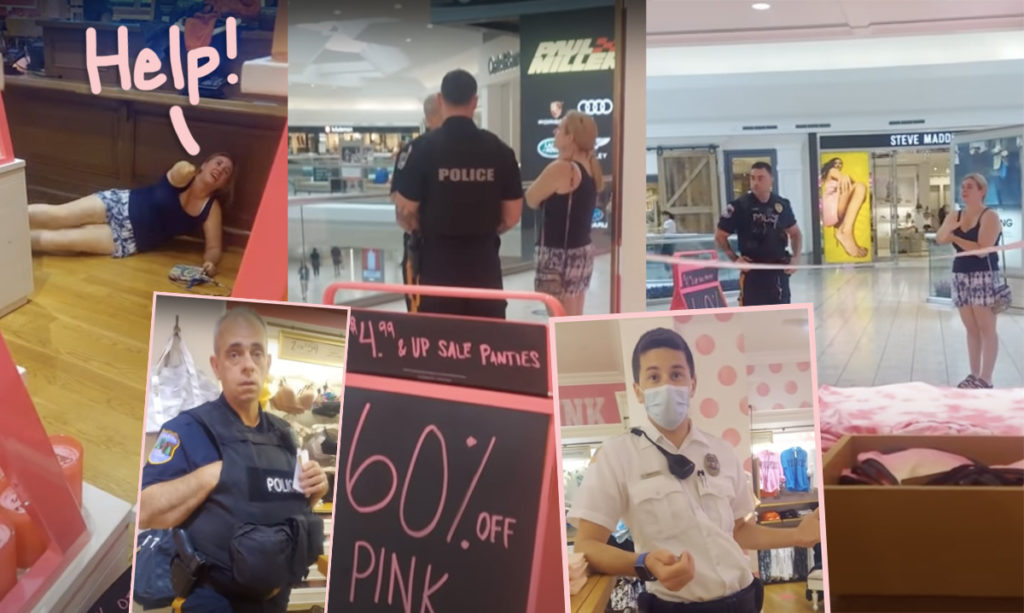 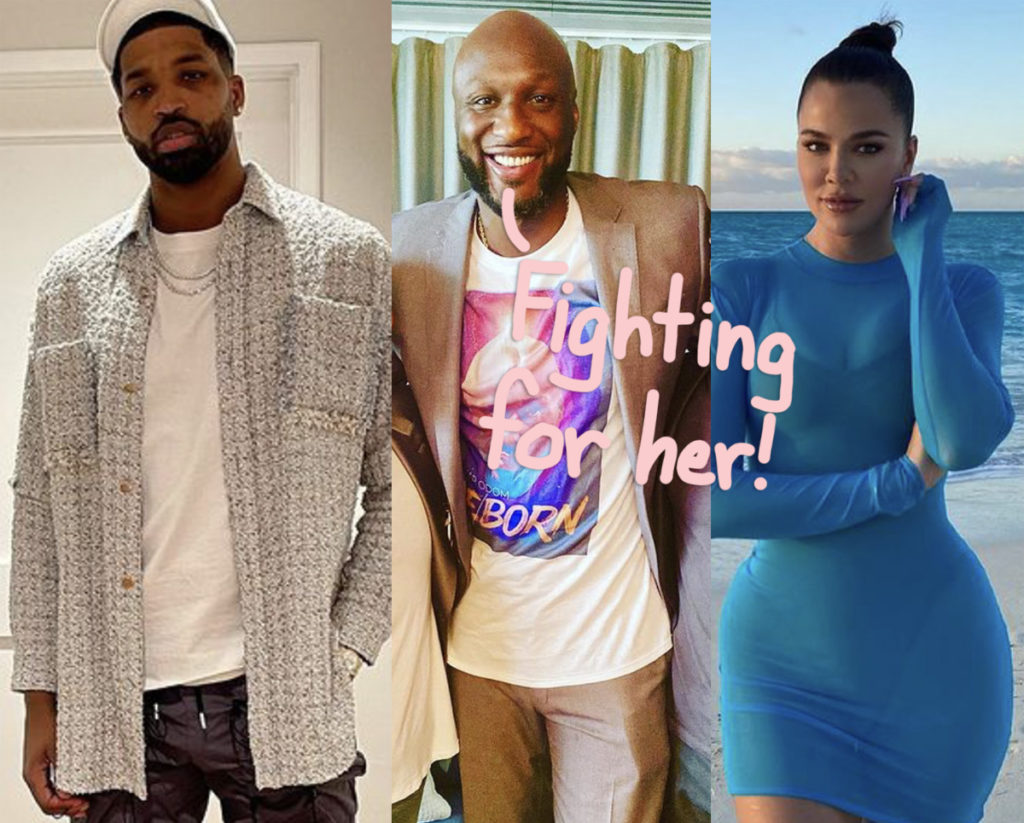 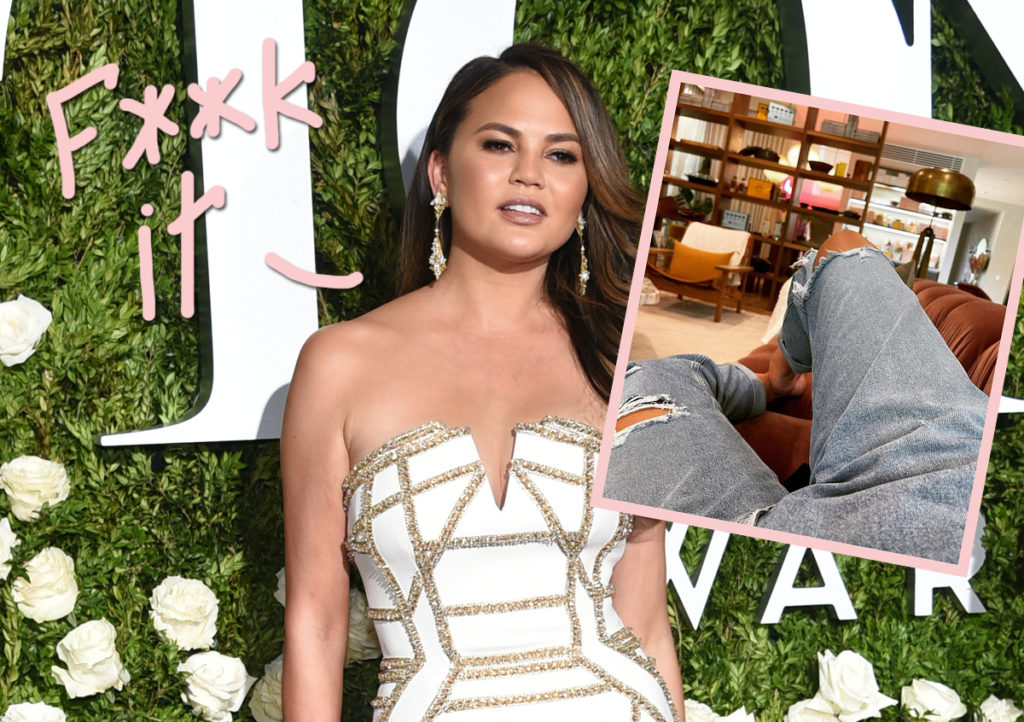