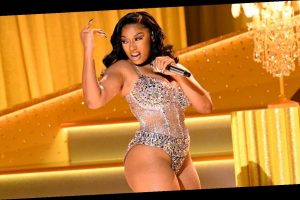 The rapper took one of the five stages in Los Angeles on Sunday night, to perform two of her most popular hits, “Body” and “Savage.”

Dressed in a bedazzled one-piece, Meg showed off her stellar dancing skills during the 1920s-themed performance, complete with plenty of feathers, twerking, the splits and a tap dance number!

Next, fans were in for another treat as Cardi B took the stage to perform “WAP” with Megan, a performance that fired up Twitter!

Cardi B and Megan Thee Stallion performing WAP live was something WE ALL NEEDED. #GRAMMYSpic.twitter.com/C9geg5fJJO

WAP WAP WAP I DONT THINK I WAS EVER THIS HYPED UP AFTER THE CLEAN VERSION OF A SONG PLEASE 😭 #GRAMMYspic.twitter.com/EhoogzKyDv

The 26-year-old “Hot Girl Summer” rapper collected her first-ever Golden Gramophone ahead of Sunday’s 63rd Annual GRAMMY Awards, winning Best Rap Performance for her “Savage Remix” with Beyoncé. She also took home the first win of the televised show, accepting the award for Best New Artist while holding back tears.

A first-time nominee four times over, Meg’s GRAMMY nominations this year also include Record of the Year and Best Rap Song for “Savage Remix.”

In addition to her big night at the GRAMMYs, Megan is also celebrating another big milestone: graduating college. The multi-talented entertainer told Harper’s Bazaar last month that she’s in her final semester of college at Texas Southern, where she’s pursuing a degree in health administration.

“Before my mom passed, she really would be on my butt about getting my degree,” Megan said of her mother, Holly Thomas, who died in 2019. “You fought through the procrastination. You fought through crazy professors. You made it home the next day from the party and still went to class. You know what I’m saying?”

Hear more in the video below.

Get the complete GRAMMYs winners list, plus GRAMMY Awards live updates at ETonline.com.