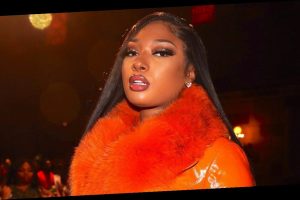 When the Recording Academy unveiled their nominations for the 2021 GRAMMY Awards on Tuesday, first-time nominee Megan Thee Stallion was recognized four times over, including for Best New Artist.

Meg was on hand during this morning’s livestream to present a handful of nominations, after which Recording Academy Interim President and CEO Harvey Mason jr. broke in to inform her of her own nominations. “Who me?” she exclaimed on air. “What?!“

Look at how @theestallion bodied that, ate it up and gave it back as she learned about her FIRST-EVER nomination at the 2021 #GRAMMYs! 👏 pic.twitter.com/KGwBmWCBDm

The 25-year-old took to social media following the announcement and reacted with a string of crying emojis.

Meg’s nominations are for “Savage Remix” with Beyoncé, which is up for Record of the Year and Best Rap Performance and Song. (Notably, her culture-defining collaboration with Cardi B, “WAP,” was not submitted for GRAMMY consideration this year.)

ET recently spoke with the rapper about what being nominated would mean to her. “I would probably be jumping out of my body,” Meg said at the time. “You would not be able to stop hearing my mouth all that day.”

“I don’t make my music in hopes of getting awards and topping charts and beating other people. Things like that don’t matter to me,” she added. “I make music that I really like and that I really enjoy and that I know that my Hotties are gonna enjoy.”

Still, Meg couldn’t deny that recognition on music’s biggest night would be a big deal for her. “This would really just be the icing on the cake for me,” she said. “Like, I’d take it to my grandma’s house and be like, ‘We did it!‘”

END_OF_DOCUMENT_TOKEN_TO_BE_REPLACED

END_OF_DOCUMENT_TOKEN_TO_BE_REPLACED
We and our partners use cookies on this site to improve our service, perform analytics, personalize advertising, measure advertising performance, and remember website preferences.Ok