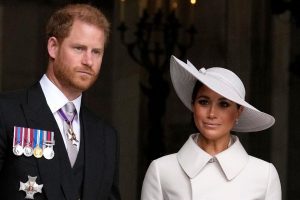 Prince Harry and Meghan Markle are reportedly set to stay just 800m away from Prince William and the Duchess of Cambridge on their surprise visit to the UK next month.

The royal couple are jetting back to the UK for a string of charity events in September, and are planning to stay in their five-bed home, Frogmore Cottage, which is situated on the Queen's estate in Windsor.

Their visit will be just days after William, Kate and their three children move into their new home on the estate, at nearby Adelaide Cottage, just a five minute walk away.

This will mark the first time the princes will be 'neighbours' since 2019, when Harry and Meghan moved out of Kensington Palace.

However, sources say the two families have "no plans" to meet, despite the fact they'll be living in such close quarters.

It's also thought the couple won't see the Queen on their latest visit, as she'll be swearing in the new Prime Minister when they are due back the country.

A source told The Sun: "It is expected family conversations will take place to see if there is any space in their diaries – but there is a lot on, especially for the Queen."

Harry and Meghan announced this weekend they'll be in attendance at the One Young World Summit in Manchester on 5 September, where Meghan will making her first public speech in the UK since the couple stepped back from royal duties in 2020.

Following this, they'll then jet off to Dusseldorf to mark a year until the beginning of next year's Invictus Games.

They'll then return to the UK for the WellChild Awards on 8 September.

It will be their first trip back to the UK since their low-key appearance at the Queen's Platinum Jubilee celebrations in June, where they also celebrated their daughter Lilibet's first birthday.

The couple held a celebratory picnic for their one year old, which included party games and face painting.

They uploaded a sweet portrait of Lilibet, affectionately named after her grandmother the Queen, to mark the occasion.

Royal fans were unsure as to how much Harry and Meghan would return to the UK, given the ongoing row between Prince Harry and the government over his and his family's taxpayer-funded security.

He previously said it was unsafe to come back to Britain with Meghan and their two young children.

At the start of August, the Prince filed a second lawsuit against the government and the Metropolitan Police over the decision not to allow him to pay for police protection when he visits the UK.

However, an official from the Judicial Office told MailOnline: "It is at an early stage, no hearings have been listed yet and no decisions have been made."