Home » Celebrities » Meghan Markle and Prince Harry call for action in passionate letter: ‘Lives literally depend on it’

Meghan Markle and Prince Harry call for action in passionate letter: ‘Lives literally depend on it’ 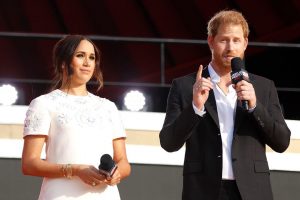 The Duke and Duchess of Sussex have written a passionate open letter calling for leaders at the G20 Summit in Rome to act immediately to help end the pandemic.

Alongside WHO Director-General Dr. Tedros Adhanom Ghebreyesus, Prince Harry and Meghan addressed the G20 leaders, writing: “When the leaders of the world’s wealthiest nations met at the G7 Summit in June, they collectively announced that 1 billion doses of COVID-19 vaccines would be sent to low- and low-and-middle-income countries to help vaccinate the world. Pharmaceutical companies have pledged almost the same.

“Yet, as several nations still don’t even have enough vaccines for their own health workers, the world is left asking: Where are the doses?

“Of the almost 7 billion doses that have been administered globally, just 3 percent of people in low-income countries have had a jab so far. Where are the rest?”

Their letter added: “Promises aren’t translating into vaccines reaching the people that need them.”

It comes after the Sussexes’ visit to New York last month, where they campaigned for global vaccine equity. The Duke and Duchess held a roundtable with WHO during their trip, where leaders from across global public health, government, and civil society discussed the barriers to vaccine access in low-income nations.

“My wife and I believe that where you are born should not dictate your ability to survive. Especially when treatments exist to keep you safe,” said the Duke to the crowds.

Harry and Meghan in New York in September

The couple reiterated the urgency of the current situation in their open letter, writing: “We must do everything in our power to get doses to as many people who want and need them, as fast as possible, in the right order, and to have the greatest possible impact.”

It also listed key actions that must be taken at the G20 Summit, including closing the 550 million dose gap in order to accelerate towards WHO’s 40 percent coverage target by the end of 2021, by speeding up existing commitments of dose donations to COVAX, pledging new ones, executing dose swaps with COVAX, and eliminating export restrictions on vaccines.

Harry and Meghan ended their letter by saying: “Cooperation of historic proportion is the only solution. Lives literally depend on it.”