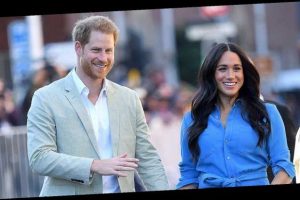 International Women's Day is on March 8 and together with the Archewell Foundation, Meghan Markle and Prince Harry called for "real acts of compassion" to commemorate the occasion. To give fans a few ideas of how to celebrate, the charity shared 20 ideas, which range from ordering from a female-fronted restaurant to supporting safe spaces for women and supporting military wives.

"[They] are hopeful to see families and communities everywhere join together to unleash compassion, one action at a time," a Sussex spokesperson told Harper's Bazaar. The magazine noted that Harry and Meghan promised that they'd be taking a few of their own suggestions, not just on March 8 but throughout the entire month of March, coinciding with Women's History Month.

"From work to family care, many of us are juggling a lot at the moment," Harry and Meghan's statement notes. "Asking something as simple as 'Are you okay?' can go a long way." Archewell has already partnered with various groups, including World Central Kitchen and The Loveland Foundation, and will continue to work with them throughout the month-long campaign. Bazaar notes that a few U.K.-based charities are also on the list, including Smart Works and the pan-African women's education charity CAMFED, even though Harry and Meghan were recently stripped of their patronages.

"Around the world, and increasingly during the COVID-19 pandemic, women have had to take on more and more — as wage earners, leaders, educators, carers, and so on," the Sussex spokesperson added. "Our hope is to inspire everyone to take action and commit to participating in just one act."

A few of the charities involved shared the news on Twitter, encouraging their followers to look into new ways to get involved.

Last year, Meghan celebrated International Women's Day by paying a visit to the Robert Clack Upper School in Dagenham. It would be one of the last things she'd do as a royal in the U.K. before she and Harry officially stepped away from their positions as senior royals.

"When we thought about what I wanted to do for International Women's Day this year, for me it was incredibly important to be with the women of our future," Meghan said in a speech at the time. "And that is all of the young women here, as well as the young men who play a very large part in this. Specifically coming to your school made a lot of sense for me because of this social justice and the impact that it's rooted in."

Meghan was involved with International Women's Day, as far back as 2015, when she gave a speech at the U.N. Women's conference in New York.

"I am proud to be a woman and a feminist, and this evening I am extremely proud to stand before you on this significant day, which serves as a reminder to all of us of how far we've come, but also amid celebration a reminder of the road ahead," she said.