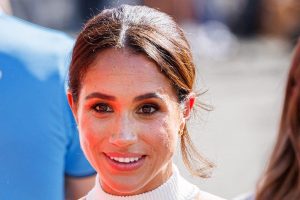 Meghan Markle and Prince Harry’s docuseries Harry & Meghan launches on Netflix on Thursday, and before the launch the Duchess of Sussex shared a message.

After her Archetypes podcast won a People’s Choice award on Tuesday evening, she took to the Archewell website to thank her fans for supporting her work. In the heartfelt message, the mum-of-two wrote: “Last night the 2022 People’s Choice Award was held in Los Angeles, California honoring fan favorites in movies, TV, music, podcasts and more. People from around the world voted, and we are thrilled to share that in its premiere season, Archetypes was awarded the top podcast honor!“

She continued: “Thank you to all the supporters and fans of Archetypes who voted for us for this special People’s Choice Award. I loved digging my hands into the process, sitting up late at night in bed, working on the writing and creative.

TRENDING NOW: Prince Harry put on the spot as he’s asked about ‘destroying the royal family’ in new clip

“And I loved digging deep into meaningful conversation with my diverse and inspiring guests, laughing and learning with them, and with each of you listening.”

She concluded by thanking those who worked on her podcast, saying: “It has been such a labor of love with an amazing team who were each instrumental in helping to bring this series to life.

“Special thanks to Terry Wood who was my right hand in this special project, along with Catherine, Rebecca, Andy, Matt, and the wider team who all worked hard to make each moment resonate. Above all, huge thanks to each of you who voted. Your support means the world.”

Meghan and Harry were at the Hope Gala on Tuesday night

The message came ahead of the release of her docuseries charting her and Harry’s departure from the royal family and the first trailer caused quite a stir when it dropped on 1 December, with the Duke stating: “No one sees what’s happening behind closed doors. I had to do everything I could to protect my family.”

PHOTOS: Did Meghan Markle just have her own ‘revenge dress’ moment?

Featuring previously unseen images and footage from their private life, the eye-opening programme shares the tale of their high-profile love story and what challenges led them to make the decision to step back as senior royals.

A second trailer also saw Harry accuse the palace of “planting stories” and Meghan claimed that the royal family didn’t protect her.

The Sussexes signed a deal with Netflix in 2020, and although the exact worth is unknown, it is reportedly around $100million.

DISCOVER: Everything Meghan Markle has said about sister-in-law Kate Middleton

The first three episodes of the docuseries aired on 8 December, with the final three due to drop on 15 December – the same day that the Princess of Wales will host her Christmas carol concert at Westminster Abbey. Kate will be joined at the festive event by husband, Prince William, as well as the King and Queen Consort, and other members of the royal family.

Prince Harry’s long-awaited and “intimate” memoir Spare will also hit the shelves on 10 January 2023, and will provide a first-hand account of his experiences, adventures, losses and life lessons that have helped shape him.

Make sure you never miss a ROYAL story! Sign up to The Royal Explainer newsletter to receive your weekly dose of royal features and other exclusive content straight to your inbox.