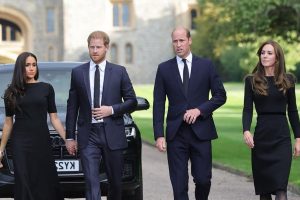 The Duke and Duchess of Sussex endured “disgusting” and “very real” threats against their lives from the far-right, according to a senior counter-terror officer.

Assistant Commissioner Neil Basu, who was the head of counter-terrorism for the Metropolitan Police, made the comments during an in-depth interview with Channel 4 News about his tenure.

In the interview which aired on Tuesday night, Neil stated that Meghan Markle was particularly targeted by the far right during this time.

He told Channel 4’s Cathy Newman: "If you'd seen the stuff that was written and you were receiving it — the kind of rhetoric that's online, if you don't know what I know, you would feel under threat all of the time."

The senior broadcaster also asked whether Neil Basu believe that there was a “genuine” threat to the Duchess of Sussex, which he confirmed.

He said: “We had teams investigating it. People have been prosecuted for those threats…”

Neil Baus’s comments echoes initial concerns made by the Duke of Sussex about the safety of his family.

Despite leaving the UK, the couple have continued to endure threats against their lives.

In a 2021 interview with Oprah, Prince Harry revealed how bad the situation had become after the couple decided to step back from Royal duties in 2020.

"The biggest concern was while we were in Canada, in someone else's house, I then got told, short notice, that security was going to be removed," He told viewers, adding that their location had been made public knowledge by a UK newspaper.

The Sussex’s eldest child Archie was less than a year old at the time, and the couple had to quickly relocate for their safety. It was a move made all the more complicated by the then-going COVID-19 pandemic.

Although they would resettle in California, with the help of filmmaker Tyler Perry, it forced the couple to hire a private security team.

Security would be an ongoing issue for the couple, as rhetoric against them escalated following their move to the US.

Eventually, the couple were given special police protection during their visit to the UK earlier this year for the Queen Elizabeth’s Platinum Jubilee.

However, threats from the far right have not been the only concern for Prince Harry.

In the documentary, The Me You Can’t See, the Duke revealed that he feared the excessive intrusion by the paparazzi.

He feared that history would repeat itself after the death of his mother Princess Diana, who had been fleeing the press in central Paris.

It is likely that the Duke will discuss this in-depth in his upcoming memoir, Spare, which will be released next year.

Dubbed “raw” and “unflinchingly honest” by publisher Penguin Random House, the book’s title makes reference to phrase “the heir and the spare” which was commonly used to describe Royal children.

The “landmark” memoir is due to be released on January 10, shortly after The Sussex’s new documentary airs on Netflix.