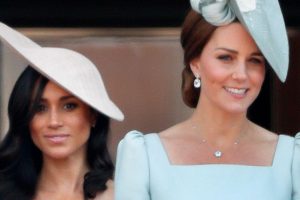 A close pal has claimed that Meghan Markle, Duchess of Sussex, 'misunderstood' Kate Middleton's flower gift after the 2018 bridesmaid fitting incident before her wedding to Prince Harry.

In 2020, the Duchess revealed in the Oprah Winfrey interview that the rumours around her allegedly making Kate cry were false, and claimed that Kate had made her cry instead.

In the interview, Meghan said: "The reverse happened. And I don’t say that to be disparaging to anyone, because it was a really hard week of the wedding.

"And she was upset about something, but she owned it, and she apologised. And she brought me flowers and a note, apologising.

"She did what I would do if I knew that I hurt someone, right, to just take accountability for it."

However, a reported pal to Prince William has claimed that the Duchess of Sussex misunderstood Kate's "peace offering" as an apology.

They told Daily Mail: "It obviously never occurred [to Meghan] that they were a peace offering, not an apology."

Explaining her side of the incident with her sister-in-law, Meghan told Oprah: "A few days before the wedding, she was upset about something pertaining — yes, the issue was correct — about flower-girl dresses, and it made me cry, and it really hurt my feelings."

"And I thought, in the context of everything else that was going on in those days leading to the wedding, that it didn’t make sense to not be just doing whatever everyone else was doing, which was trying to be supportive, knowing what was going on with my dad and whatnot.

"It wasn’t a confrontation, and I actually don’t think it’s fair to her to get into the details of that, because she apologised. And I've forgiven her."

July 2021 also saw Prince William and Prince Harry unveiling a statue of their late mother Princess Diana on what would have been her 60th birthday.

The source claimed that Kate was meant to be present for the event but decided not to attend so Meghan's absence wouldn't stick out.

They added: "Despite much provocation, both William and Catherine have tried to keep the peace more than anyone will ever realise."

The Duke and Duchess of Sussex recently came to the UK at the beginning of June for the Queen's Platinum Jubilee.

Due to only working royal family members being allowed to appear on the Buckingham Palace balcony, Prince Harry and Meghan watched the Trooping the Colour from the Major General’s Office.

In a statement, the palace said: "After careful consideration, The Queen has decided this year’s traditional Trooping the Colour balcony appearance on Thursday 2nd June will be limited to Her Majesty and those Members of the Royal Family who are currently undertaking official public duties on behalf of The Queen.”

For all the latest TV and Showbiz news, sign up to our daily newsletter here.