Home » Celebrities » Meghan Markle & Prince Harry: Have They FINALLY Made Peace With Will & Kate?!

Meghan Markle & Prince Harry: Have They FINALLY Made Peace With Will & Kate?! 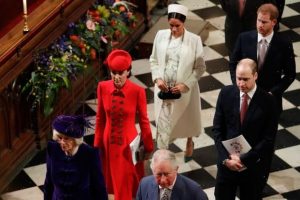 But in the almost two years that Meghan Markle and Prince Harry have been living 5,500 miles away from London in a peaceful coastal subdivision near Santa Barbara, CA, it’s often seemed as though their rift with the royal family has been progressively getting worse.

Of course, for much of that time, neither side was really making any effort to make nice with the other, as evidenced by Meghan’s Oprah interview, which was essentially a long overdue nuke dropped directly on Buckingham Palace.

But in recent months, it’s seemed as though the ice has begun to thaw …

Insiders say Kate reached out to Meghan ostensibly seeking updates on the baby — but also to try and repair the broken relationships that had caused both of them endless headaches in recent years.

The process hasn’t been a quick and tidy one, however, and we don’t think anyone expected it to be.

There were hopes that Harry and William would bury the hatchet at Prince Phillip’s funeral but that didn’t happen.

(In fact, rumors that William spoke ill of Meghan following the even probably set the peace talks back a few months.)

Those hopes were renewed when both brothers attended the unveiling of a Princess Diana memorial statue shortly thereafter.

But alas, on that occasion as well, relations between the two princes were nothing more than cordial.

And so, like a modern Lysistrata, it’s up to the women in this drama to forge peace.

Sources say Meghan and Kate are in regular communication for the first time since the Sussexes left England.

The men have remained recalcitrant, however.

But biographer sand royal expert Andrew Morton predicts that that won’t be the case for much longer.

“They are brothers, they are united in life and share common experiences that no one else can understand or appreciate,” Morton told Newsweek in a recent interview.

Yes, Morton is convinced that with a few thousand miles between them the two warring factions will stop seeing one another as a threat.

Ant he says that Meghan isn’t the troublemaker she’s been made out to be, as the issues between Harry and the Cambridges date back to well before she entered the picture.

“I think the central issue is that Harry had lived in his brother’s shadow as the third wheel and demonstrably so,” he said.

But Morton stresses the fact that that double act might soon be reunited.

“Prince Harry still keeps in touch with members of the royal family and speaks to the queen from time to time,” he told Newsweek.

“They’ve left all the doors open. Even the naming of Lilibet, the queen’s family nickname, shows this is a couple who have given the royal family a bit of a kicking but have not started a revolution,” Morton continued.

“I think if you were to prick Harry he would bleed blue blood. They talked about being trapped. Hardly a ringing endorsement of the institution that stands at our social pinnacle,” he added.

“It takes a long time to adapt to becoming happy in your own skin.”

Morton seems to feel that as Harry and Meghan grow mort comfortable in their newfound freedom, they’ll learn to forgive and forget theoir formal rivals.

It would be a development that would make fans on both sides of the pond very happy.