Meghan Markle & Prince Harry: Snubbing Royals on Christmas Due to Beef With William?! 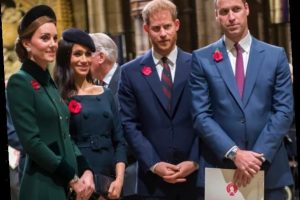 Generally speaking, Christmas is a time for forgiveness, compassion, and understanding.

But like everything else about this year, Christmas 2020 will likely be one giant sh-tshow, so what better time to stick it to the in-laws you can’t stand anyway?

That may or may not be Meghan Markle and Prince Harry’s thinking, but whatever the case, it seems the Duke and Duchess of SoCal will not be feasting on figgy pudding with the Harry’s family at Sandringham Castle this year.

A new report from the Daily Beast refers to Harry and Meghan’s planned absence as a “snub” and attributes their decision to stay home to the couple’s ill will toward one royal in particular — Prince William.

Yes, there are many theories regarding the never-ending feud between William and Harry.

Much ink has been spilled on the alleged rift between Meghan and Kate Middleton, but many insiders say the real story is the bad blood between the brothers.

The narrative goes that Harry didn’t approve of Meghan when Harry first brought her around, and he warned his younger brother to proceed with caution.

Harry rightfully took offense, and while they’ve occasionally been able to stand side-by-side and smile for a photo op, the relationship between Diana’s sons has never been the same.

Members of the royal family are said to be outraged by the Yuletide “snub,” as this Christmas could easily be the last for 94-year-old Queen Elizabeth or 99-year-old Prince Philip.

Of course, as others have pointed out that the Sussexes might have reasons for spending the holiday at home that have nothing to do with any royal rancor.

According to sources who spoke with The Mirror, Harry and Meghan are eager to spend Christmas together in her hometown of LA.

They just bought their first American home together, and they’ve apparently assembled quite the eclectic guest list for a holiday get-together.

Meghan and Katharine have known each other since their school days, and it seems David has become a “surrogate dad” to Harry — which must make for a weird group dynamic when the four of them hang out.

“Meghan very much wants to host the first Christmas at their new home with her mum,” a source says.

“She’s really excited and is planning on doing all the traditions she grew up with as a child, including the cooking,” the insider adds.

“They’ve also invited David and Katharine to spend it with them.”

The insider goes on to say that Meghan insisted on being the host:

“David had mentioned Harry and Meghan going to theirs but Meghan wants it at home,” the informant claims.

“They want to get on with their new lives. Christmas with Harry’s family is not in the plan.”

So there you have it — Meghan’s not snubbing anyone, she’s just a new mom with a new home who wants to host the holidays at her place.

Of course, the desire to send an inter-continental middle finger to the people who made her feel like a perpetual outsider in London is also perfectly understandable.

END_OF_DOCUMENT_TOKEN_TO_BE_REPLACED

END_OF_DOCUMENT_TOKEN_TO_BE_REPLACED
We and our partners use cookies on this site to improve our service, perform analytics, personalize advertising, measure advertising performance, and remember website preferences.Ok