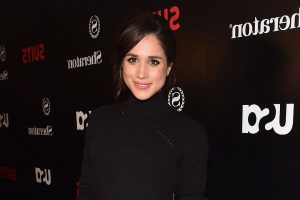 Before she married Prince Harry and became the Duchess of Sussex, Meghan Markle had a successful acting career. One of her best-known roles was in US legal drama, Suits, where she played paralegal and Mike Ross’ love interest, Rachel Zane.

During a Twitter Q&A last week, Suits creator Aaron Korsch revealed what he loved about working with Meghan. He wrote: “Among other things, I loved Meghan’s enthusiasm both on set and off. She brightened the mood wherever she was.

“She would always write a note after reading the season opener and finale and it always made my day. Among many other things that paints a picture…”

Meghan is renowned for her thoughtfulness, particularly for her friends and charities she works with. The Duchess loves handwritten notes and after guest-editing the September issue of British Vogue in 2019, she sent leather-bound notebooks with personal letters to the contributors. How sweet!

After her engagement to Prince Harry was announced in November 2017, she also confirmed she would be leaving the cast of Suits. Her character departed the series at the end of season seven, where Mike and Rachel finally tied the knot and left to run a new law firm in Seattle.

Meghan with her fellow Suits cast members in 2017

Speaking about leaving her acting career, Meghan said in her joint engagement interview with Harry: “I don’t see it as giving anything up. I just see it as a change. It’s a new chapter. And keep in mind I’ve been working on my show for seven years. We were very fortunate to have that sort of longevity on a series. For me, once we hit the 100 episode marker, I thought, I have ticked this box and I feel really proud of the work we’ve done there and now it’s time to work as a team with [Harry].”