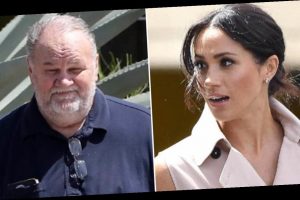 Thomas Markle said Tuesday he does not believe the British royal family is racist after his daughter, Meghan Markle, claimed in an explosive interview that an unnamed family member had concerns over her son’s skin color, according to a report.

Thomas Markle told ITV, the British network, that he has “great respect for the royal family.

“I think Los Angeles is racist,” he said, according to Reuters. “California is racist, but I don’t think the Brits are.”

He may have been taking aim at California because the couple lives in Montecito.

During Sunday’s highly publicized interview with Oprah Winfrey, Meghan alleged that when she was pregnant with her son, Archie, there were “concerns and conversations about how dark his skin might be when he’s born.”

“That was relayed to me from [Prince] Harry. Those were conversations that family had with him,” Markle said. She declined to say who had the conversation with Harry, only saying that revealing the name would be “very damaging.”

“The thing about what color will the baby be or how dark will the baby be. I’m guessing and hoping it’s just a dumb question from somebody, you know, it could just be that simple,” Thomas Markle said. “It could be somebody asked a stupid question. Rather than being a total racist.”

Markle said the comment should be investigated, according to the news organization.

He added that the duchess also let him down when he will ill. The pair have a rocky relationship.

Meghan and Harry both admitted that the unchecked racism in the U.K. tabloids and alleged lack of support from the royal family were the two major driving forces behind their decision to step back from their role as senior members of the royal family and move to the U.S.

“Kate [Middleton] was called Waity Katie, waiting to marry [Prince] William, while I imagine that was really hard and I do… this is not the same and if a member of his family will comfortably say we’ve all had to deal with things that are rude. Rude and racist are not the same,” she explained in a new clip that aired Monday on “CBS This Morning.”

Markle, 39 — whose father is White and mother is Black — also described how Kate was given a press team to help handle negative stories while she and Harry didn’t receive the same treatment.