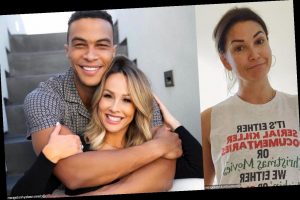 In a new interview, the former ‘Dancing with the Stars’ contestant reveals that she is surprised to see the now-former ‘Bachelorette’ couple being together longer than she’d expected.

AceShowbiz –Melissa Rycroft apparently had doubts about Clare Crawley and Dale Moss‘ whirlwind romance and kne w that they wouldn’t last long way before the pair announced their split. In a latest edition of Us Weekly’s “Bachelor Confessions”, Melissa even  revealed that she was surprised to see them being together longer than she’d expected.

During a rapid-fire round, the 37-year-old was asked which Bachelor Nation couple that she was surprised was still together. To the question, she was quick to answer, “Well, right now, Clare and Dale.” The interview was taken before Clare and Dale announced their separation, so it seemed like Melissa saw it coming.

Dale confirmed his split from Clare on Tuesday, January 19 in an Instagram post. “I wanted to share with you all that Clare and I have decided to go our separate ways,” he announced. “We strongly believe in leading with love and always remaining true to oneself – something our families have taught and instilled in us throughout our lives. We only hope the best things for one another. Please respect our privacy as we work through this together.”

Later on January 25, the former football player opened up about the split on Instagram Story. “I know a lot of y’all have seen me smile on social media and say I don’t seem as hurt or burdened by this, but that’s the farthest thing [from the truth],” he said. “This time has sucked, and thank God that I have the friends and the family that I have, because they’ve literally had to carry me through the last two-plus weeks.”

He noted that “building a relationship in general is tough. Especially when you’re doing it in the public eye” because “media will take things and run with them” and “people will spread lies or always want to point the finger.” However, he said that “there’s no one person to blame in this situation.”

He also shared in the post that he loves and respects Clare “enough to let her know how I feel, even if that’s against the expectations of everybody else, and it’s gonna take time.” He added, “I wanted nothing more than to make this relationship work, and I put my heart and soul into it each and every day. And I wanted nothing more than to build a healthy relationship.”

Clare herself had weighed in on their split. Sharing that she needed time to “digest” their separation, she admitted, “Our relationship was not perfect, but I can say that I was genuinely invested with all of my heart.” The TV personality further stressed before ending her message with some positivity, “I may not have all the answers, but I do know this – I will continue to show up, stand by my word, and be committed to love.”