Home » Celebrities » Michael B. Jordan's Sexiest Man Alive Title Is the Only Thing That Made Sense in 2020

Michael B. Jordan's Sexiest Man Alive Title Is the Only Thing That Made Sense in 2020 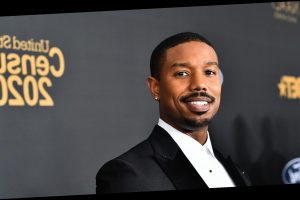 Michael B. Jordan was just named People's Sexiest Man Alive and … well, that checks out. The news was announced on Live with Jimmy Kimmel Tuesday night.

Of course, the reveal wasn't without theatrics. Jordan walked onto the set wearing a yellow hazmat suit with a giant smiley face covering his real face. Audience members then asked yes or no questions via Zoom to try and figure out who it was. Eventually, he pulled off his mask and revealed himself – of course to screaming fans.

On Instagram, People revealed the actual cover and a video of the 33-year-old star who explained that it was a "good club to be a part of"

On Twitter, fans immediately praised the decision with some joking that it was the only thing 2020 got right.

On his own social media, Jordan made a sweet note about his grandmother writing, "My grandma lookin down talkin bout “that’s my baby”"