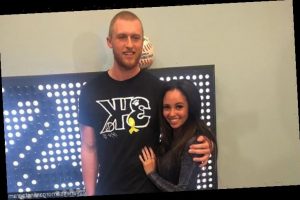 Prior to the divorce filing news, the ‘Riverdale’ actress took to her Instagram account to announce her pregnancy alongside several videos and photos from her baby shower.

AceShowbiz –Michael Kopech and Vanessa Morgan‘s marriage is over. It’s been reported that the professional baseball pitcher has filed for divorce from the pregnant actress less than a year after the two tied the knot.

Reports suggested that Kopech filed the documents on Sunday, July 19 in Morris County in northeast Texas. No further details are available as of now, as the hearing date has also not been listed in the documents.

Reps for Morgan declined to comment on the divorce filing. Meanwhile, reps for Kopech did not immediately respond to requests for comment.

Kopech and Morgan got engaged at the Grand Canyon in July 2019 before exchanging vows at the Historic Walton House near Miami in early January of this year. Madelaine Petsch, who stars alongside Morgan on “Riverdale“, served as the bridesmaid during the ceremony, while other “Riverdale” stars were spotted in attendance.

Days before the divorce news was made public, Morgan announced that she’s currently pregnant with their first child together. Taking to Instagram, she shared several photos taken from her baby shower where she found out that she’s expecting a baby boy. However, Kopech did not appear in any of the videos and photos she posted on the photo-sharing site.

In the caption of the post, Morgan expressed how “overjoyed” she was to be welcoming her baby in January next year. “This little guy has already brought me so much happiness and a feeling of such a greater purpose. I cannot wait to meet you!!” she said. “On a personal note, I have had the blessing of growing up in the public eye having started my acting career at age 6. While this has been incredible for me, I am very much looking forward to giving this little guy some room to grow up outside of the public eye, until he tells me otherwise.”

She continued, “Lil one you were made with so much love & already exude a light so strong it warms my belly. Thank you God for this blessing. I’m just so happy & can’t wait to dedicate everyday to being the best mommy I can be.”

END_OF_DOCUMENT_TOKEN_TO_BE_REPLACED

END_OF_DOCUMENT_TOKEN_TO_BE_REPLACED
We and our partners use cookies on this site to improve our service, perform analytics, personalize advertising, measure advertising performance, and remember website preferences.Ok