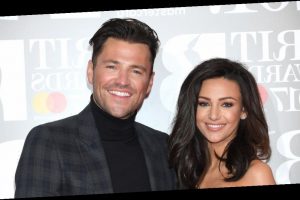 Michelle Keegan has spoken out about how proud she is of her husband Mark Wright after he revealed his brand new career move.

Mark surprised his fans when he announced on social media that he has signed to football club Crawley Town to play as a professional footballer.

Posting two photos of him playing football side by side, Mark, 33, revealed: “How it started… how it’s going. 12 years later and today I put pen to paper for @officialcrawleytownfc!!”

Mark also explained to his fans why he had decided to follow his footballing dream, eleven years after hanging up his boots as a player

He said: “For 11 years since I fully retired from serious football I’ve missed it every day.”

“My life took a complete U-turn when I was 22 and it’s been the best 10.5 years I could have ever dreamed of but my love for the game has never gone away and the fact that I never played a professional game in the Football League has always niggled away at me,” Mark continued.

“If I don’t do it now, I never will and at 33, reaching the older side of a professional footballer… it has to be now.”

Actress Michelle, also 33, was one of the first to comment on the post, as likes flooded in. And she had nothing but praise for her husband of five years.

She wrote: “Never known such a hard working determined person, the word ‘can’t’ just isn’t in your vocabulary.”

But former Coronation Street actress Michelle wasn’t the only famous face to send her congratulations to the ex TOWIE star.

Best mate James ‘Arg’ Argent said: “I am so bloody proud of you, you were always good enough to turn pro! What a story!” While Thom Evans added: “Absolute class mate! And well deserved.

Mark signed off his post by thanking the club for letting him be a part of their team, and telling fans why he couldn’t wait to get started.

He typed: “I’ve worked so hard to get fighting fit and I will continue to do so. When/if the time comes for me to make my debut, it will be a day I remember and cherish forever.”

Mark concluded: “Fingers crossed it goes as planned but here goes!! Life is so short and I urge you to fight for what makes you happy, take chances, change if change is needed, live everyday like it’s your last, don’t let anybody tell you, you CAN’T and most importantly LIVE WITH NO REGRETS !!”

END_OF_DOCUMENT_TOKEN_TO_BE_REPLACED

END_OF_DOCUMENT_TOKEN_TO_BE_REPLACED
We and our partners use cookies on this site to improve our service, perform analytics, personalize advertising, measure advertising performance, and remember website preferences.Ok