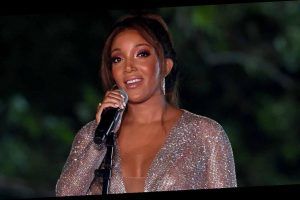 Mickey Guyton has lots to celebrate! Not only did she receive her first GRAMMY nomination on Tuesday but she also made history.

The 37-year-old singer’s “Black Like Me” song has been nominated for Best Country Solo Performance, making her the first Black female artist to earn a solo nomination in a country music category.

In 1976, The Pointer Sisters’ song, “Live Your Life Before You Die,” was nominated for Best Country Vocal Performance by a Duo or Group at the GRAMMYs but never a solo Black female singer until Guyton.

While the country crooner has not directly responded on social media to her historic nomination, she did retweet Women of Country’s message about her big moment with crying emojis.

This isn’t the first time Guyton has made history this year in country music. In September, she became the first Black woman to perform at the Academy of Country Music Awards.

After her emotional performance of her song, “What Are You Gonna Tell Her?,” at the ACM Awards, ET spoke with Guyton.

“That phrase, ‘You see it, you can be it’ really rings true, and I just — standing here for other women of color, it means the world to me,” she said. “That’s why I’m here.”

END_OF_DOCUMENT_TOKEN_TO_BE_REPLACED

END_OF_DOCUMENT_TOKEN_TO_BE_REPLACED
We and our partners use cookies on this site to improve our service, perform analytics, personalize advertising, measure advertising performance, and remember website preferences.Ok