Home » Celebrities » Milania Giudice Opens Up: I Miss My Dad SO Much!

Milania Giudice Opens Up: I Miss My Dad SO Much! 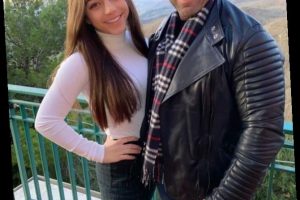 It’s no secret that Joe Giudice has a special bond with his daughters, even after years of incarceration.

His 15-year-old daughter Milania is growing up faster than anyone can believe, and she’s opening up about how much she misses her dad.

Milania has shared a series of photos of her with her father, such as this one, shared on Christmas in 2019 when she was visiting him in Italy.

Now she has shared another to her Instagram Stories.

As you can see, she snapped a charming mirror selfie beside her dad.

“I miss you,” she confesses on the photo itself. Awwwww!

It is so stunning to look at how quickly the Giudice girls are growing up.

Height is a huge marker of adolescence. Milania is 15, an age at which many of us met or exceeded our parents in height.

As you can tell from this (throwback) selfie, Milania quickly encroaching upon her father’s height.

More than that, she is just looking so grown up — exactly what we would expect from a bright high school student.

As we noted, this is far from the first photo that Milania has shown recently.

A lot of photos of her with her father were from before his incarceration, and she has really grown up since then.

Below, you can see her almost matching him in height in Rome, just outside of the Flavian Amphitheater — commonly called the Coliseum.

Rome is a beautiful city, but Milania was mostly there for quality time with her dad.

Each of the Giudice girls is processing the horror of their father’s deportation in their own way.

Gia is fortunate enough to have the most memories from before Joe was imprisoned.

Meanwhile, young Audriana has the fewest memories, and has broken down in tears trying to recall Joe’s role in some family trips.

Milania and Gabriella are middle children, so they have a foot in each world, so to speak.

According to Teresa, Joe’s deportation in some ways had a positive effect on Milania.

She began working out and focusing more on school, where Teresa said that she had previously been acting out.

(Children have fewer coping mechanisms than adults, which is why stress is more likely to influence behavior; she needed patience and she got it)

When life is totally outside of your control, you do what you can with the things that you can control. As a result, Milania’s grades are totally on track.

In December, Joe warmly welcomed all four of his daughters to Italy as they arrived at the airport.

“Hi, girls. Welcome to Italy again,” he gushed at the time. “I love you. They are so cute. Love you.”

We hope that they enjoyed their visit. It will be their last chance to see him for a few months.

Meanwhile, Teresa had to go even longer without seeing her (separated) husband, as she films during the time that the girls were visiting.

As she and other family have stated, they are adults and will survive this. But this is tearing her daughters up.

Teresa Giudice FLIPS the Eff OUT Over Joe’s Deportation!Start Gallery