Home » Celebrities » Missing Family Thought To Be Dead Were Actually On Camping Trip – Putting Searching Loved Ones Through '17 Days Of Hell'!

Missing Family Thought To Be Dead Were Actually On Camping Trip – Putting Searching Loved Ones Through '17 Days Of Hell'! 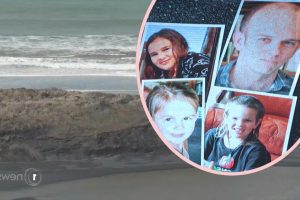 In the wake of the horrific story of Gabby Petito, there has been a burst of new attention on the myriad missing persons cases which are still unsolved. Unfortunately there are far, far too many to mention both in the US and abroad.

In that sea of dread, there has been one bright, shining island of good news — which has come as a total shock to everyone involved.

Back on September 11, New Zealander Tom Phillips took his three children — Jayda Jin, 8, Maverick, 6, and Ember, 5 — on a camping trip near Marokopa on the North Island. However, when the family didn’t return as expected after a few days and no one had heard from them, their loved ones got worried.

Then Phillips’ Toyota Hilux was discovered near Kiritehere Beach, seemingly abandoned — and everyone feared the worst.

In a statement on September 14, the family said:

“Because of where the vehicle was found we are understandably very anxious and fearful for the safety of Tom and the children. It is possible that they were all swept off the beach as the sea was particularly wild over the weekend.”

Just an awful state of limbo to be held in, not knowing for sure yet fully expecting any news you do get to be horrible.

The local authorities did everything they could to aid in the search for the missing family, from foot searches to aerial surveillance. Waikato Police Inspector Will Loughrin told The New Zealand Herald:

“The search for the family was extensive. If you’ve been out there, that’s dense bush area, a significant amount of area we had to cover.”

And yet, they were not found. Nearly two weeks and nothing. So after 12 days the search was suspended.

“It had seemed pretty obvious that they had gone into the sea. Hope dwindled and we sort of became more and more resigned, and sad, just deeply sad.”

Then on September 29, Tom and the three kids “just walked in the door” of the family farm, according to a flabbergasted family member.

Apparently the fam had decided to go on an extended camping trip and had been sleeping in a tent in a “dense bush area.” The father of three is a skilled outdoorsman, and the kids were all completely safe and sound.

Unfortunately he is seemingly not so gifted in some other categories — namely being considerate and having foresight. Because he didn’t let anyone in his family know how long he and the children would be gone! All that panic was for nothing!

As Inspector Loughrin put it in a press conference late last week:

Obviously he noted the end of the torment was shocking but also the best case scenario:

“For the outcome to be what we always wanted is fantastic.”

After putting his family and the small community through all that over what turn out to — miraculously from everyone else’s point of view — be nothing to worry about, Tom is understandably full of “remorse.”

In a new statement over the weekend, the family expressed the mixed emotions they were experiencing:

“We, the family of Thomas, Jayda, Maverick and Ember Phillips wish to express our relief and joy at their safe return, well and happy. In these uncertain times with so many added pressures Tom’s decision to go camping without letting anyone know was obviously distressing to everybody.”

They specifically offered an apology from Tom, as well:

“Since his return, on gaining an understanding of what lengths have been gone to, to ensure their safe return and the distress caused, he is remorseful and humbled for the unintended trouble he has caused.”

#humbled? Yeah, that’s one way to put it we guess.

In the end we are just happy everyone is OK. To everyone else out there, LET YOUR LOVED ONES KNOW IF YOU ARE GOING OFF THE GRID! Geez.