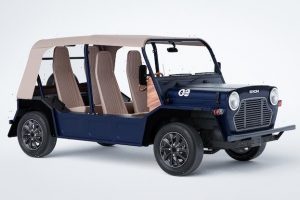 If you purchase an independently reviewed product or service through a link on our website, Rolling Stone may receive an affiliate commission.

One of the most iconic vehicles in pop culture history is making a celebrated return, just in time for the 60th anniversary of the James Bond film franchise.

Moke has unveiled the “60 Years of Bond” edition, a special collaboration between Moke America and EON Productions which serves as a “love letter to the James Bond film canon.” The limited-edition James Bond Moke features the classic Sixties cruiser remade in a midnight blue exterior with tan seats, a “Mango Tree”-style wooden dashboard, wood gear shift knob and wood steering wheel complete with the iconic 007 logo.

The 007 logo also adorns the side of the front hood, and appears on the cover of the back spare tire. Though the Moke cruiser was first released in 1964, there are a few modern upgrades in the new vehicle of course, like a backup camera and Bluetooth. This is also an all-electric vehicle, which has been a part of the Moke family since Moke America brought the car back to the United States in 2017.

The 60 Years of Bond Moke Cruiser retails for $28,975 and is available now on mokeamerica.com. As this is a special-edition release, every Moke is custom built to order (the company says it’ll be ready in approximately 150 days).

Both the Moke and the 007 films go back more than 60 years. The Moke was actually created in 1959 by the British Motor Company as a combat-ready car designed to be parachuted from the skies by the British army. But the open-air car quickly became a favorite of both celebrities and tourists alike, thanks to its peppy engine and charming good looks.

It wasn’t long before Hollywood came calling, with the beloved cruiser owned by everyone from Brigitte Bardot to Paul McCartney (Jimmy Buffet also name drops the Moke in his song, “Autour Du Roucher,” off his 2002 album, Far Side of the World). At the recent F1 Miami Grand Prix, Max Verstappen was driven down the track in a Moke to pick up his winner’s trophy.

The company actually released the “San Monique” Moke last year, which pays homage to the white and blue Moke that Roger Moore drives through the streets of San Monique, the fictional Caribbean island in Live and Let Die.

The latest 007 Moke, meantime, runs on electric power and is entirely street legal, with a top speed of 25mph and up to 40 miles of range. As the company says, it’s ideal for rides “from the beach and golf course to the farmer’s market and city streets.”

The new “60 Years of Bond” edition Moke is available now at mokeamerica.com. The car celebrates the 60th anniversary of the James Bond franchise, which launched with Dr. No, the very first film in the James Bond series, which was released in the UK in October of 1962.

Related: Where to Watch Every James Bond Movie Online