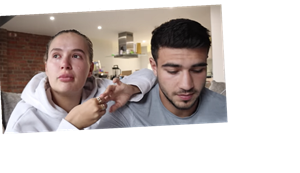 Molly-Mae Hague and Tommy Fury have moved out of their Manchester flat following the death of their dog.

The Love Island couple, both 21, were spotted taking their belongings out of their apartment building and hauling them into a black transit van, which was parked right outside.

Molly-Mae looked forlorn as she stepped out in a pale blue tank top with a zipper down the front as she carried an orange bag.

The reality star, who was recently seen lifting an empty dog carrier out of a car, tied her hair back into a high bun while dragging a black suitcase behind her, in pictures obtained by The Sun. Her other half appeared equally subdued as he carried some bedding outside while sporting a casual white T-shirt. A pal of the couple was also seen loading a giant human-sized brown teddy bear into the van.

Molly-Mae and Tommy have refrained from speaking out about their move on their Instagram accounts just yet as it was recently reported that the blonde beauty decided to quit social media after cruel troll comments in the wake of their dog's death.

It's thought that the social media influencer is taking a step back amid backlash she's received from the public.

A source told The Sun: "Molly-Mae is taking a break to have time to herself for a few days."

On Wednesday, 3 June, the blonde beauty and her significant other posted a 12-minute long YouTube video hitting back at claims slamming them for shipping a dog from abroad.

In the clip, Molly-Mae explained she had paid to get an autopsy done on the puppy, who died after a seizure, which had revealed he had enlarged organs, a low white blood cell count, which meant he couldn’t fight infections, and an under-developed skull.

The TV personality said: “What the vet said is that if Chai was in Russia, if Chai was in my mum’s care, or with the breeder, Chai was always going to pass away with the condition he was born with, with everything that was wrong with him he was not going to be able to survive past a very, very young age.”

The couple then moved to clear up some of the criticism they had received after announcing the death of their dog.

She said: “Whilst we understand people’s opinions with him being shipped from Russia, which we completely understand and agree with what people are saying, that is not what made this little baby dog pass away.”

Molly-Mae, whose Love Island pals Olivia Attwood and Olivia Bowen have both defended her, then insisted they didn’t take the dog out before its immunisations and the pup was given the injections before he was handed over to them.

She said: “One thing I just wanna clarify which I has upset me more than anything, I’ve literally been devastated over for the last two hours is that people think that we took Chai out before he had his injections.

“I just wanna clarify that we would never, ever do that. Chai had every single injections, every single vaccination. He was four and a half months old.

"The breeder gives him his injections before we get him into our care. So we were told it was fine to take him outside, which it was.”

She added: “Anyone making comments about us killing our own dog… I mean, honestly,” before putting her hand over her mouth.