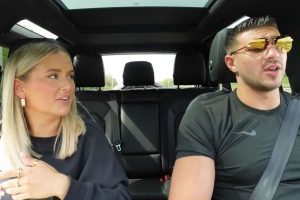 Love Island star Tommy Fury has left fans baffled this week after he claimed his partner Molly-Mae Hague "doesn't flush the toilet" after having a wee.

The professional boxer made the amusing claims during a recent Youtube video which charted the couple’s journey to Molly-Mae’s sister’s engagement.

Near the beginning of the 19-minute long video which was shared on Molly-Mae’s channel, the couple were discussing what they liked and disliked the most about each other, with Molly’s most offensive habit being her failure to flush.

“The worst thing about living with Molly…” began Tommy, “… is every time Molly goes to the toilet, apart from doing a number two, she doesn’t flush. If she does a wee, she won’t flush and it’s kind of annoying.”

But partner Tommy was having none of it as he said: “No that’s right, and that’s why you’re laughing. Every time she goes and does a wee, she does not flush.”

Once again Molly then dismissed the claim, this time saying: “That’s a lie,” before jabbing back at the boxer: “At least I don’t live skids every time I go to the toilet!”

The playful banter between the pair then continued as the couple discussed their toilet habits, much to the amusement of fans tuning in to the channel.

“That was uncalled for,” said Tommy, before sharing: “Ay, this woman has a number two right, and it leaves skids under the water! Not even on the way down, there’s not even skids on the way down, it’s underneath the water.

“So imagine this right, it’s like a rock at the bottom of a pond, but then…there’s skid marks underneath the water. How does that even happen? How?! That must break through the water at some capacity in order to leave stains there.”

Despite the unusual nature of the conversation, the pair were quick to show fans and followers alike that it was this level of acceptance of each other without judgement that helped to cement their relationship.

“We don’t have to put up a front. Like, we’re living with each other and we are completely ourselves. Like, even when I go to the toilet, I don’t have to be like, ‘Oh, I need to be quiet’,” explained the Love Island star.

Molly agreed, before adding: “Like, I do not understand personally when I hear people say like, I’ve been with my boyfriend for eight years and still not farted in front of him. Or whenever we go for a poo we always shut the door.

“Why would you ever want to be with someone when they like, wouldn’t love you if you were a certain way? I can’t believe that. You just love that person for their complete natural self.”

For all your updates on Tommy Fury, Molly Mae Hague and Love Island, sign up to our daily OK! newsletter.