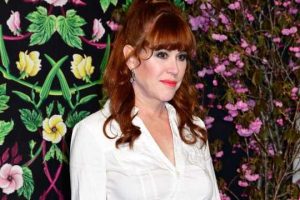 Molly Ringwald is mourning the loss of her father. The actress penned a touching tribute to her dad, Robert Ringwald, following his death on Aug. 3 at the age of 80.

Molly took to Instagram on Saturday to share a slideshow of snapshots of herself and her father, who was an accomplished musician and celebrated pianist, renowned for both playing and promoting jazz throughout California for over 60 years.

“It’s with a heavy heart that my family says goodbye to my father,” Molly wrote in her Instagram caption, after also penning a tribute to her dad for The Sacramento Bee. “I consider myself very lucky to have had in my life as long as I did.”

The slideshow of throwback photos include two pics of Molly and her father spending time together — including one shot of Robert sitting with her at a piano.

The collection also featured a photo of Robert as a young boy, as well as a slide that reads “father” in braille — as Robert went blind at an early age, and taught himself how to play the piano without the aid of sight.

“Robert Scott Ringwald, known to most as Bob, and to a lucky few as Dad and PopPop, died Tuesday,”  Molly wrote of her father, before recounting his remarkable life in her touching obituary. “As a preteen, he attended the California School for the Blind in Berkeley. After a couple of years, he returned home to Citrus Heights and graduated with the Class of 1960 at San Juan High School. That same year, he married Adele Frembd, his wife of 60 years.”

“Although Bob was first drawn to modern jazz, performing at local Beatnik spots such as The Iron Sandal, it was the music of Louis Armstrong that inspired him to shift his musical focus — instilling a lifelong passion for the performance and preservation of “traditional” New Orleans jazz,” her obit continued, in part. “In 2012, Bob was honored by the festival as ‘The Emperor of Jazz,’ which both touched and embarrassed him. Despite having been a performer for nearly his entire life, he was never comfortable having attention bestowed on him unless he was on stage with a piano. Nevertheless, Bob drew attention wherever he went. His natural charisma, authenticity and sense of humor made people fall in love with him and want to be around him.”

Honoring his bright spirit and personality, Molly shared, “Anyone who knew Bob also knew his mischievous streak, and his ever-present, slightly ribald sense of humor. If you didn’t sufficiently beg to get off of his email joke list, you would have received one just a couple of days before he died.”

Apart from Molly, Robert is survived by his wife, Adele, daughter Beth Ringwald Carnes, son Kelly Ringwald, as well as six grandchildren and two great-grandchildren, and his sister, Renée Angus.