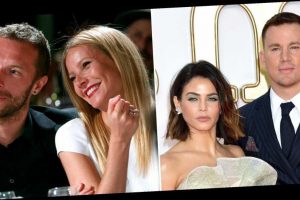 To the next chapter. Many celebrity splits have rocked Hollywood over the years, including Gwyneth Paltrow and Chris Martin as well as Channing Tatum and Jenna Dewan.

Tatum and Dewan’s love story began on the set of 2006’s Step Up, where they costarred as onscreen love interests. The duo tied the knot in 2009 and welcomed daughter Everly in 2013. To the surprise of many, they would go on to announce their separation in April 2018.

“We have lovingly chosen to separate as a couple. We fell deeply in love so many years ago and have had a magical journey together,” the pair said at the time in a joint statement to Us Weekly. “Absolutely nothing has changed about how much we love one another, but love is a beautiful adventure that is taking us on different paths for now.”

The statement continued, “There are no secrets nor salacious events at the root of our decision — just two best-friends realizing it’s time to take some space and help each other live the most joyous, fulfilled lives as possible.”

The Witches of East End alum began dating actor Steve Kazee in October 2018. They got engaged in February 2020 and welcomed son Callum that following month. The Magic Mike actor, for his part, dated Jessie J from October 2018 to December 2019. After reconciling in January 2020, they split for the second time that April.

Paltrow, meanwhile, coined the term “conscious uncoupling” when announcing her split from Martin after 10 years of marriage in 2014. The pair have continued to remain good friends while coparenting their daughter Apple and son Moses.

“It’s a lifelong commitment to constantly reinvent your relationship with your ex, which you do presumably because you have children together,” the Goop founder told Harper’s Bazaar in February 2020. “I don’t see a reason to do it if you don’t have children together. Some people do. But I think we put all the hard work in at the beginning. I would say very rarely is it difficult now. We’ve learned how to communicate with each other. We love each other. We laugh. We have the best of each other. It’s really nice. It makes you feel like you don’t have to lose.”

Scroll down to see the most shocking celebrity splits over the years.