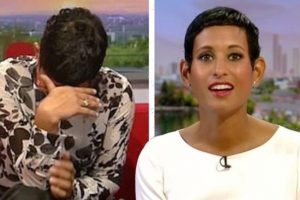 Naga Munchetty, 46, often leaves fans dying to know where her outfits are from on BBC Breakfast, as the fashionista sports some funky patterns and glorious colours on-air to brighten viewers’ mornings. But when it comes to running, she admitted she was told her attire made her “looks ridiculous”.

Every little bit helps to stave off further injury

Fans of Naga will know she is a keen sportswoman, but is prone to leg injuries.

Last year, the BBC star told fans she had pulled her calf muscle, and it wasn’t the first time.

So in order to prevent more damage to her legs, she got herself some fancy new leg supports, taking to Instagram to show them off.

“Every little bit helps to stave off further injury,” she penned.

“(Even though I was told I look ridiculous),”

“Another run done, Getting there… Happy Thursday.”

Her followers rushed to the comments section to share their thoughts on her get-up.

One offered some advice, asking: “Shin splints or compartment syndrome? Anything lower leg I’d look at ankle mobility. (Speaking as a PT and a lower leg issues sufferer).”

“[Achilles] tendinitis and calf muscle pull,” Naga replied tearfully, as the PT shared some ankle flexion exercises for her to try.

Others urged her to ignore what people say, as one quipped: “Worn the exact same ones for years after continuous calf problems… they’re great! Ignore the haters.”

“If your tendinitis is playing up, try Tuli’s heel cups too. I started using them when I struggled with tendinitis, and have had no pain since!”

It comes after she spoke to an interviewee on her programme who, knowing her passion for golf, invited her to come down and present the prizes to their competitors.

After their chat, the guest known as Kevin, tried his luck.

He said: “I’m not putting you on the spot, but I run a military golf society in Disley, which isn’t far from Manchester.

“We’d love you to come along one day and present our prizes,” he added.

And Naga didn’t even hesitate before she agreed.

“No problem,” she beamed.

“Get in touch with the team! I’ll get the team to get your details and we’ll get in touch.”

Kevin was ever so grateful, as he responded: “You’re very kind Naga! Thanks.”

“Take care!” she signed off before turning to her co-star Nick Campbell.