Natalie Imbruglia Admits to Feeling ‘Shy’ About Her Body 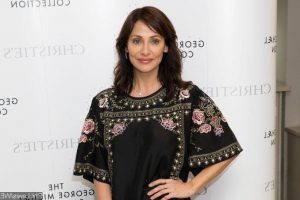 As she insists that happiness comes from ‘inside,’ the 47-year-old ‘Torn’ hitmaker shares in a new interview that her dad has played a big role in shaping her attitude.

AceShowbiz –Natalie Imbruglia feels “shy” about her body. The actress-turned-singer, who has a sense of style that has always been distinctly different to that of fellow Australian pop star Kylie Minogue, admitted that her dad has played a big role in shaping her attitude.

“I would wear hotpants if I had Kylie’s butt but I’m really kind of shy in that way,” the 47-year-old star, who like Kylie, previously appeared on the Australian soap “Neighbours”, told The Sun newspaper. “That’s probably my dad’s fault. When I was younger he’d always say, ‘You’re not wearing that, that skirt’s too short.’ “

Natalie shot to global stardom in the 90s with her chart-topping hit “Torn”. Looking back on the decade with a lot of fondness, she said, “It’s really wonderful to think what I lived through and the music that was around at the time, or my music, might have an effect on younger generations. Does that mean I’m vintage?”

The singer struggled to repeat her early successes in the music industry. Upon reflection, she actually didn’t have any regrets about her career arc. She explained, “I didn’t have an income for a long time. My profile dropped off and so did my bank balance.”

The season 3 winner of “The Masked Singer U.K.” continued, “And that was the best thing that ever happened to me. I was forced to struggle, which is a normal, healthy part of growing up. I hadn’t gone through that.”

Meanwhile, Natalie previously admitted she doesn’t attach too much importance to fame. The singer also insisted that happiness comes from “inside.” She continued, “I know it’s transient and I don’t put a lot of weight on it because it’s not who I am. There’s a misconception that if you’re famous then you feel good. It doesn’t work like that. There might be some perks to the job, but happiness is something that’s inside yourself.”