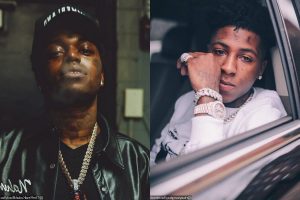 In a video originally posted to Kodak’s Instagram Story, the two rappers could be seen laughing and talking on a FaceTime call, months after the ‘Tunnel Vision’ rhymer said he likes YoungBoy’s music.

AceShowbiz -NBA Youngboy a.k.a. YoungBoy Never Broke Again and Kodak Black have patched things up between them after years of animosity. The two appeared to have squashed their beef following their virtual interaction.

On Thursday, January 12, a video surfaced of the Baton Rogue artist and the Pompano Beach native having a FaceTime call. In the clip originally posted on Kodak’s Instagram Story, the two stars could be seen laughing and talking as they discussed food during the video call.

Naturally, fans loved to see YoungBoy and Kodak back on speaking terms. “They both seem to have matured a lot. We love to see it,” one person reacted to the video. Another weighed in, “My boy making peace with everyone. Jaz has definitely aided in his growth.”

YoungBoy and Kodak had collaborated on songs like “Chosen One” and “Water” before they had a fallout in 2017, after Kodak released “Time Never Mattered”, on which he appeared to diss YoungBoy. “But I hope that I don’t go broke again, n***a I’m killin’ young babies Kodak never goin’ broke again, n***a you a free agent,” he raps on the song.

Kodak fanned the flames in 2020 as he commented on the arrest of Yaya Mayweater, who was accused of stabbing YoungBoy’s other baby mama Lapattra Lashai Jacobs. The “Super Gremlin” hitmaker accused the “Outside Today” emcee of “fully cooperating” with authorities when Yaya was arrested.

Back in August 2022, Kodak appeared to try to bury the hatchet with YoungBoy as he tweeted that he likes YoungBoy’s music, but hates his fans. “Jus this n***a fans homie! Or whoever tf behind all this #YBBETTER s**t,” he wrote in a since-deleted tweet. “That s**t be irritating…and can’t nobody else say they don’t feel me. A n***a too real. I ain’t hating on no f**kin’ body. I just say what everybody else scared to say.”

But YoungBoy wasn’t ready to accept the olive branch at the time as he responded, “you don’t like my fans I don’t like you ‘p***y.’ ” He also took a subliminal jab at Yak on his song “Head Busted”, on which he raps, “Got the industry and my whole town want to kill me/ B***h I’m cutthroat, to my opp and sure, I don’t f**k wit’ gremlins.”

YoungBoy has since changed the attitude as he has been campaigning to stop the violence.