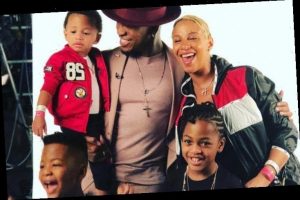 The ‘So Sick’ hitmaker is an ‘amazing’ father to his children, so his estranged wife Crystal Smith says amid the internet chatters suggesting that she’s going to file for divorce.

AceShowbiz –Ne-Yo‘s estranged wife Crystal Smith has praised the singer’s “amazing” skills as a father, amid reports the couple have split ahead of their fourth wedding anniversary.

The “So Sick” hitmaker, real name Shaffer Smith, tied the knot with model Crystal Renay on February 20, 2016, weeks before welcoming their first child, son Shaffer Smith, Jr., and they went on to have another boy, Roman, in 2018.

However, it was reported by The Jasmine Brand that Crystal recently called time on her marriage, and is planning to file for divorce.

Reflecting on the rumours in a chat with Baller Alert, Crystal said “the accuracy is that he’s an amazing father and our kids are blessed to have a father like him. I wouldn’t take that back for anything in this world. Everything else is God’s will.”

The “Sexy Love” singer has yet to comment on the marriage split himself.