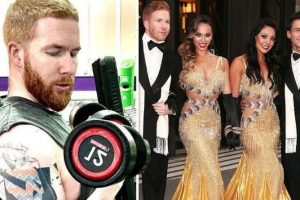 This year, competitive ballroom dancer Neil Jones has been paired with EastEnders star Nina Wadia, 52, and last week, the couple wowed the Strictly Come Dancing judges with their energetic, fiery Samba to Mi Gente by J Balvin and Willy William. However, Neil, 39, has revealed that he has to hit the gym five days a week in order to maintain his impressive physique and keep up with his fellow Strictly pros, due to being “the oldest” on the show, now that Anton du Beke, 55, has become a judge.

In a recent exclusive, Neil opened up about the challenges of staying in shape for the show as he gets older.

“Even while we’re doing the show and training, I still go to the gym in the morning as well.

“The thing is, what happens is, we get really lean during the show, we lose so much weight because we’re dancing so much.

Now the oldest male pro on Strictly, Neil reflected on how some of his fellow dancers, such as Gorka Marquez and Giovanni Pernice, are considerably younger than he is, as they are both aged 31.

He continued: “So I’m turning 40 next year and I just wanted to try and get myself in better condition.

“So I’ve got to be taking care of myself a lot more.

“I’m definitely being more active, so I was doing a lot of wakeboarding and wake surfing.”

He also quipped that he will now be stepping in for Anton du Beke as the sophisticated older gentleman in Strictly’s professional line-up, as the fan-favourite has now joined the judging panel.

“I’ve stepped into Anton’s shoes now he’s gone to the judges,” he said.

“I’m going to be the statesman of Strictly now.”

He went on to say, “I always remember watching Anton walking in with his shirt and tie, and he’d come in with his cup of tea.

“I think I have to start coming in with shirts and ties as well more often.”

The dancer was previously married to fellow Strictly pro Katya Jones, 32, but the couple decided to part ways in August 2019 – nearly one year after the Russian dancer’s kiss with celebrity partner Sean Walsh.

Explaining the reason behind their split, he told the Sun: “We found that we’d grown apart like people do, so we were like, ‘OK, let’s go our separate ways’.”

Katya won’t have any trouble keeping fighting fit with her partner this year, as she has been paired up with Olympic swimmer Adam Peaty, who is already getting some buzz from the general public as the one to watch.

The top scoring dancers from Saturday night with 34 points are TV presenter AJ Odudu and newbie professional dancer Kai Widdrington, after they stunned the judges with their animated Jive to Gold Dust by DJ Fresh.

Neil and Nina received 24 points on Saturday night, which places them in the middle of the leaderboard.

This weekend, they will dance to the Eurythmics’ Would I Lie to You? with a Tango that they hope is strong enough to save them from the first dreaded dance off.