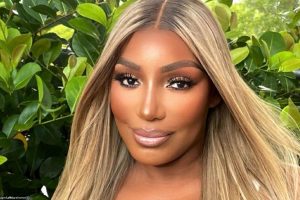 The ‘The Real Housewives of Atlanta’ alum, who accuses Bravo of encouraging racism, takes to her Twitter account to warn her followers about that kind of people as they often hide their ill intention.

AceShowbiz –NeNe Leakes took to her Twitter account to call out “abusers” who want “power over their victims” amid her ongoing racism lawsuit against Bravo. The former star of “The Real Housewives of Atlanta” warned her followers about that kind of people as they often hide their ill intention.

“Just remember, abusers want power over their victims!” NeNe tweeted. “They want to break you! Most abuse takes place behind closed doors (hint: this is why you don’t know or see everything) In the surface it looks fine right.”

She received support from her fans after posting the message. Echoing her sentiment, one Twitter user wrote to her, “EVERYWHERE! especially CORPORATE America when they can’t use US like a pawn or PUPPET. Stand on your truth NeNe, all things work together for GOOD….. look at MONIQUE’s VICTORY, be anxious for nothing yours is coming. TRUST GOD, not MAN.”

“We are very aware of what has been done to you, it’s unacceptable and they will not get away with it! You got this,” someone added. Also sending support for the TV star, another fan wrote, “Stay strong. Some situations you better for it. More blessings, more support and definitely more peace. You are supported!! The devil always looking to rob the peace of the highly favored!!! You got this!!”

Blasting Bravo, someone pointed out, “what’s crazy is that network has criminals, cons, exfelons, scammers, and people still on air that has physical touched the boss..but they want us to believe your the problem.” Meanwhile, NeNe noted, “There were many people behind the scenes that were complicit! They need to be exposed.”

Earlier this year, NeNe filed a lawsuit against Andy Cohen and Bravo as she accused them of “encouraging” racism on the show. In her lawsuit, the 54-year-old star alleged that the team ignored her complaints about years of racist remarks from her former co-star, Kim Zolciak-Biermann.

She further claimed that the network’s execs “blacklisted” and “silenced” her for speaking up against the network that helped her rise to fame. She told TMZ back in May, “But I was constantly being retaliated against, being blacklisted, not able to work, being silenced, and so, you know, it was difficult to do.”