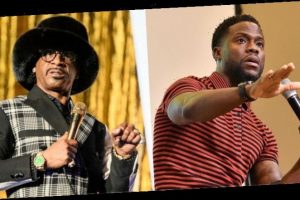 Comedy rivalries are nothing new. Bill Cosby and Eddie Murphy famously feuded over Cosby’s stance on profanity and Kevin Hart have come up against other comedians who’ve criticized his comedy style. One of Hart’s most outspoken critics is Katt Williams.

Williams has accused Hart of being basic in his talent and believes that Hart’s success is a result of Hollywood choosing him and making him a star – versus Hart earning it. A new YouTube documentary explores the decades-long feud between the two men.

Williams was lauded as the comedy king due to his unique fashion, outlandish performance style, and his knack for storytelling. He’d produced a few standup specials that were critically acclaimed and popular among fans but he’d begun to get into legal trouble. Simultaneously, Hart was working to secure his place in comedy but didn’t have as much success.

In 2008, Williams was tapped to star in Fools Gold. The movie was to be filmed on location in Australia but Williams was unable to leave the country due to his legal issues. As a result, Hart was hired as Williams’s replacement. According to YouTube’s Comedy Hype, this is the first instance of a potential rift between Williams and Hart.

After Fools Gold, Hart was hired to star alongside comedy great Eddie Murphy in Meet Dave. He later told The Breakfast Club in a 2012 interview that Williams was initially set to play his character, which allegedly caused more frustration on Williams’s part.

As Hart’s career began to take off, Williams’s career was on the decline. He continued to release standup specials but his acting gigs in Hollywood dried up, appearing in one per year over the next few years, while Hart starred in major ensemble blockbusters back to back and released more standup specials on his end. Rumors of Williams being on drugs and his erratic behavior began to take precedence over his career.

While doing press for his role in Scary Movie 5, Williams spoke of Hart for the first time, acknowledging that there was some form of bitterness – or at least, that he felt he was a better comedian than Hart.

“I don’t have a problem with Kevin Hart, I never have, simply because I am a fan of comedy and judge a person by what they bring comedically,” Williams said. “If I am the king, then my crown is not supposed to be able to worn by anybody else. That doesn’t mean they won’t try to put it on someone else’s head but the crown won’t match…I want my crown back!”

He later said that he paved the way for Hart and gave Hart’s management team the blueprint and advice on how to make him great. Still Williams believed he was the greatest comedian of all time. Williams later called Hart a Hollywood puppet.

Related: This is Why Kevin Hart and Mike Epps Just Can’t Get Over Their Feud

In the beginning, Hart ignored Williams’s comments. Instead, he focused on building a brotherhood with other comedians and promoting unity and positivity. Williams responded by challenging Hart to a comedy, rap battle, or sports battle.

Williams’s comments simmered down until 2018 when he criticized Hart’s comedy style during an interview at an Atlanta radio station. He also said that Hart does not own his content.

After taking the high road for over a decade, Hart finally responded to Williams. According to Hart, Williams should direct his anger inward and analyze why his career was at a standstill. Hart claimed during a 2018 interview on The Breakfast Club that Williams sabotaged his own opportunities due to his superior attitude and legal trouble and was viewed as a liability. As a result, big studios opted not to work with Williams.

Williams responded on Instagram live and hinted that he felt Hart was a sellout. He also challenged Hart to a fight.

Williams has refocused his attention on his career, winning an Emmy for his appearance in the FX comedy Atlanta. He’s also released a Netflix standup special. Hart has done the same by continuing to expand his empire.

Neither men have hinted that their beef will die down anytime soon.

END_OF_DOCUMENT_TOKEN_TO_BE_REPLACED

END_OF_DOCUMENT_TOKEN_TO_BE_REPLACED
We and our partners use cookies on this site to improve our service, perform analytics, personalize advertising, measure advertising performance, and remember website preferences.Ok