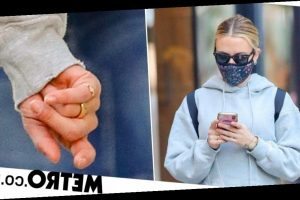 Scarlett Johansson stepped out for a stroll in New York and was seen sporting a new all-important accessory – her wedding ring.

The Avengers actress, 35, flashed her gold wedding band for the first time as she headed out for a stroll in the city without her husband, comedian Colin Jost, 38.

The pair sent fans into overdrive last month when they casually revealed they had tied the knot, after three years of dating.

Scarlett and Colin announced their happy news in a statement given to an American charity they both support called Meals On Wheels, with the organisation revealing the pair had wed in an intimate ceremony attended by their ‘immediate family and loved ones’.

Now, Scarlett is settling into married life and it seems to suit her, as the Black Widow star looked totally relaxed as she headed out with her wedding ring firmly in place.

Asides from the noticeable new addition to her left hand, Scarlett was seen looking lovely while keeping it low-key in jeans and a grey cropped hoodie.

She ditched her red carpet heels for the comfort of her trainers and covered up in shades and a floral face mask, while stepping out amid the coronavirus pandemic.

Scarlett was without her hubby and appeared glued to her phone, as she made her way through the city.

Her casual appearance comes after reports revealed her wedding had been an impromptu affair.

Sources told People that the turnaround for Scarlett and Colin’s nuptials had been pretty quick, as they revealed: ‘They only planned the wedding for a few weeks. Just close family and friends attended.’

Meals On Wheels America broke the news the pair had wed by sharing a statement to the charity’s Instagram page that read: ‘We’re thrilled to break the news that Scarlett Johansson and Colin Jost were married over the weekend in an intimate ceremony with their immediate family and loved ones, following Covid-19 safety precautions as directed by the CDC.

‘Their wedding wish is to help make a difference for vulnerable older adults during this difficult time by supporting @mealsonwheelsamerica. Please consider donating to celebrate the happy couple by clicking the link in our bio.’

This will be Scarlett’s third marriage – she first wed ex-husband Ryan Reynolds, who is now married to Blake Lively, in 2008 before splitting three years later in 2011.

Scarlett then married Romain Dauriac in 2014. They were together for three years – splitting in 2017 – and share daughter Rose, six.

END_OF_DOCUMENT_TOKEN_TO_BE_REPLACED

END_OF_DOCUMENT_TOKEN_TO_BE_REPLACED
We and our partners use cookies on this site to improve our service, perform analytics, personalize advertising, measure advertising performance, and remember website preferences.Ok