Nick Cannon Insists Kyrie Irving ‘Is Not Anti-Semitic’ Amid Controversy 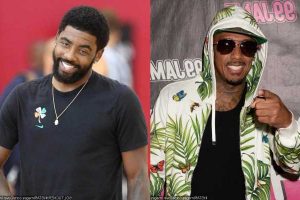 The TV host shows support to the Brooklyn Nets player as he slams the basketball team for giving the athlete ‘dehumanizing’ conditions after he promoted an anti-Semitic film on social media.

AceShowbiz –Nick Cannon showed support to Kyrie Irving. On Tuesday, November 8, the TV host made it clear that he’s team Kyrie as he slammed the Brooklyn Nets for suspending the basketball player after he promoted an anti-Semitic film on social media.

During an interview with CEO of the Anti-Defamation League, Jonathan Greenblatt in the new episode of his podcast, Nick discussed controversy surrounding Kyrie at one point. “The Masked Singer” host said, “I can wholeheartedly say I know Kyrie Irving is not anti-Semitic.”

Jonathan, however, fired back. “When given the chance to say are you anti-Semitic or not, he didn’t say, ‘No I’m not anti-Semitic,’ ” he reminded the host. “The movie is saying white Jews invented the Holocaust and six million Jews didn’t get killed. Ok … I know that isn’t right because there is a gigantic historical record. Jewish people know, when you dehumanize us this way, we know what’s around the corner.”

Nick later argued, “The slave masters would bring the buck – the one that gets out of line – so all the other slaves would see lash after lash, show them the power to set an example. ‘This is what you must do to fall in line.’ So, when we see the six things that Kyrie must do to get his job back, that’s dehumanizing.”

The “Nick Cannon Presents: Wild n’ Out” host referred to the six conditions that the Nets outlined for Kyrie to be able to be back in the team. One is apologizing for linking to the movie and the basketballer seemingly had already done that through the statement he posted on Instagram on Thursday night.

Kyrie is also required complete the anti-hate causes the Nets first mentioned on November 2. It included a $500,000 donation to the Anti-Defamation League, but the organization could not accept the money while the athlete refused to apologize. Kyrie also has to complete sensitivity training in addition to completing anti-Semitic and hate training, both of which are created by the Nets.

The fifth condition is for Kyrie to meet with Jewish community leaders in Brooklyn. Meanwhile, the last condition is Kyrie has to meet with Nets owner Joe Tsai to demonstrate what would be “the lessons learned and that the gravity of the harm caused is understood.”

Kyrie landed in hot water after posting a link to the Amazon page for the 2018 film “Hebrews to Negroes: Wake Up Black America” last week. The film is based on a 2015 book of the same name, which has been described as “venomously anti-Semitic.” It also quotes Adolf Hitler to convince the audience about the existence of a Jewish plan for world domination.

Kyrie then defended himself after Joe and the NBA called him out. “Out of all the judgment that people got out of me posting, without talking to me, I respect what Joe said, but there has a lot to do with not ego or pride with how proud I am be African heritage but also to be living as a free black man here in America knowing the historical complexities for me to get here,” he said.

“So I’m not going to stand down on anything I believe in,” he further stressed. “I’m only going to get stronger because I’m not alone. I have a whole army around me.”