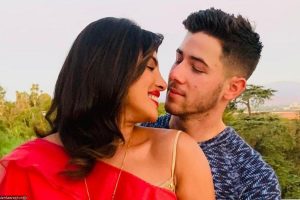 During the outing, the couple can be seen sharing a sweet kiss while having lunch at the outdoor table with a few friends as well as the actress’ mother, Madhu Chopra.

AceShowbiz –Nick Jonas and Priyanka Chopra couldn’t keep their hands off of each other during an outing in London. The Jonas Brothers” singer and the “Quantico” alum were photographed locking lips while on a lunch date at the Beach Blanket Babylon restaurant in London’s Notting Hill.

In some pictures of the August 12 lunch date obtained by Page Six, the couple could be seen sharing a sweet kiss while having lunch at the outdoor table with a few friends as well as Priyanka’s mother, Madhu Chopra. It was also said that the pair laughed a lot during the outing.

For the date, Priyanka opted for a gray and tan long-sleeved patterned button-down top with matching pants. The actress paired them with some jewelry as she styled her locks into a high ponytail. As for her singer husband, he wore a white jersey top and black pants. He completed his style with white sneakers and sunglasses.

The lunch date arrived after the spouses were snapped staying close while leaving the Crown London Aspinalls Casino. They were photographed holding hands while looking fashionable in a blue patchwork sweater and gray pants for Nick and a long-sleeved black dress for Priyanka. To protect themselves amid the COVID-19 pandemic, they both wore black face masks.

Prior to this, Nick made headlines over his bike accident which took place on May 15. In the footage from NBC’s “Olympic Dreams Featuring Jonas Brothers”, the “Spaceman” singer could be seen losing control of his bike while competing against his siblings Joe Jonas and Kevin Jonas. He was rushed to the hospital and was thankfully discharged a day later.

Addressing the incident in a press conference, Nick said, “I always give 110 percent, and sometimes that gets you the gold.” He added, “In this case, it got me a fractured rib, bruised tailbone and a hospital dinner. But I’m recovering. Thanks for asking, next question.”